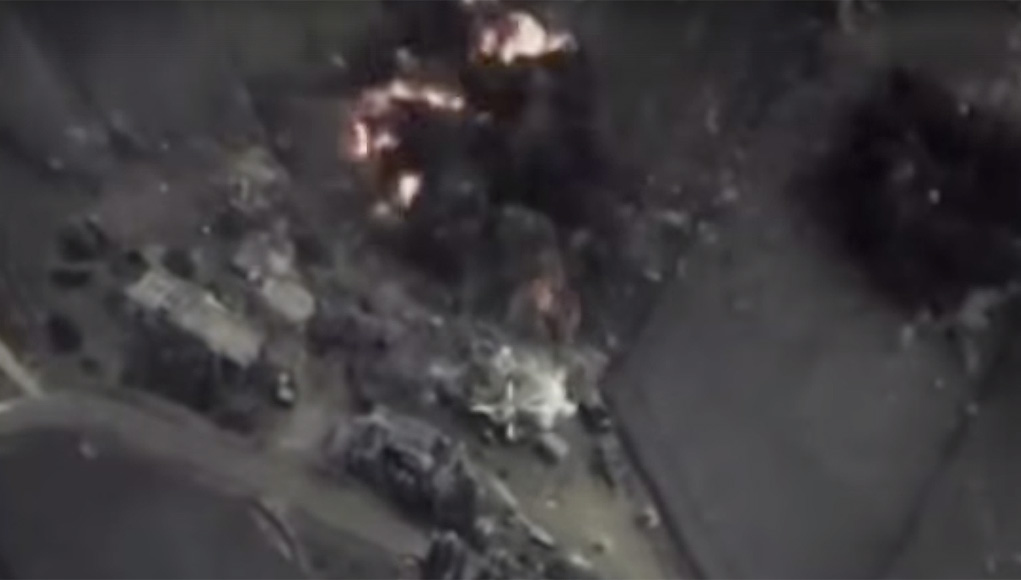 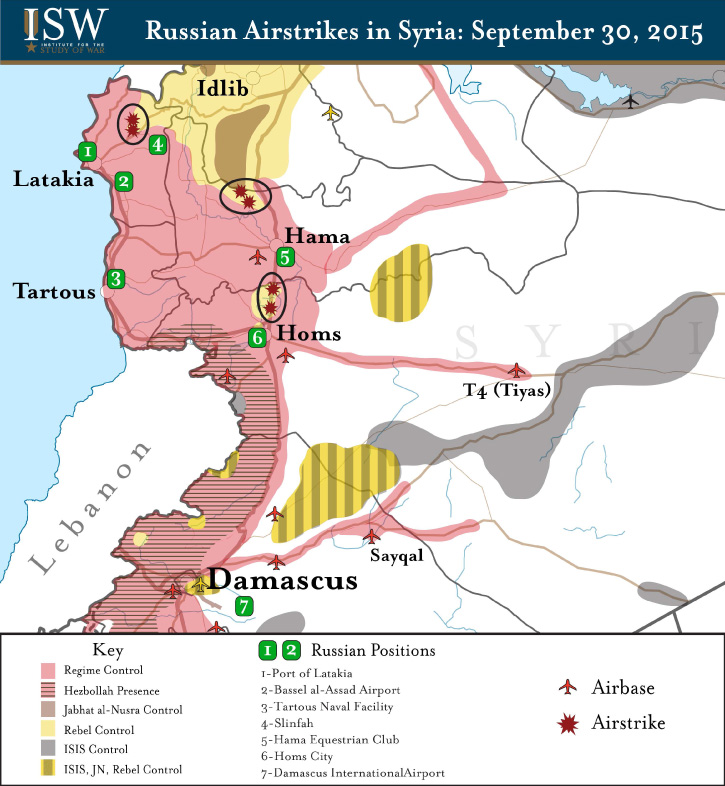 Claiming to target ISIS, Russia conducted its first airstrikes in Syria. According to the Russian Defense Ministry, warplanes targeted eight ISIS positions, including arms, transportation, communications and control positions. The Syrian state-run news agency SANA reported that Russian warplanes had targeted “ISIS dens” in al-Rastan, Talbiseh and Zafaraniya in Homs province; Al-Tilol al-Hmer, in Qunaitra province; Aydoun, a village on the outskirts of the town of Salamiya; Deer Foul, between Hama and Homs; and the outskirts of Salmiya. According to ISW analysis, Talbisah is home to Syrian al-Qaeda affiliate Jabhat al-Nusra, hardline Islamist Ahrar al-Sham, and a number of other local rebel groups, all of which are active in local governance efforts in the area.

The Su-34s attacked their targets from an altitude of 15,000 ft. The effect shown in Battle Damage Assessment (BDA) aerial imagery taken by Russian UAVs indicate that some targets were indeed struck by precision guided weapons.

Although the Su-34 shown on video were armed with precision guided weapons, other strikes were not so accurate. Some attacks employed high yield weapons (likely 2000 pound fuel-air explosive bombs) that create significant collateral damage, primarily blast and incendiary effect. In fact, blast damage are clearly visible at ranges of several hundreds of meters from the point of impact. These effects indicate the possible use of fuel-air explosives weapons, widely used by Russian forces.

The ouvert use of such weapons by the Russians is likely done by choice, delivering a clear message of deterrence to all sides taking part in the fight – The Syrian regime, all rebels battling the regime and the coalition forces supporting them.

According to the London-based Syrian Observatory for Human Rights, 28 people were killed in the strikes, including women and children. The Syrian National Coalition reported that 36 people were killed, all civilians. “I want to be careful about confirming information, but it does appear that they (Russian airstrikes) were in areas where there probably were not ISIL forces,” US Secretary of Defense Ash Carter told reporters yesterday.

Although there are small ISIS “sympathetic” cells in the rebel-held pockets of northern Homs, the Russian decision to target terrain that is held by the Syrian opposition and not ISIS signals Russia’s intent to assist the Assad regime’s war effort at large, beyond anti-ISIS operations.

U.S. officials also expressed serious doubts about what the true intentions behind the move may be. “As we see the very capable air defense [systems] beginning to show up in Syria, we’re a little worried about another A2/AD  bubble being created in the eastern Mediterranean,” said Gen. Philip Breedlove, commander, U.S. European Command (EUCOM).

Over 50 Russian aircraft and combat helicopters have been deployed at Syria’s Hmaimin airbase, located close to the port of Latakia. The base is guarded by a battalion of marines and is protected by a group of Russian warships from the sea.

Despite the Russian declared intention to assist fighting ISIS in Syria, NATO defense officials are concerned of the Russian military buildup in the country, according to the Washington Post. While the move’s stated goal in moving into Syria is to fight the Islamic State, NATO’s top commander believes Russia is building a strong air defense ‘bubble’ over north-western Syria, that would extend far beyond the Syrian territory, to deny the Western coalition air operations over Syria and, in fact, over the Eastern Mediterranean.

As of last week, Russia has more than two dozen aircraft at a newly renovated airfield in Latakia province, including ground-attack aircraft and helicopter gunships. In addition to the aircraft, there are at least 500 troops and number of tanks and armored personnel carriers.

The Israel Air Force which repeatedly operated over Syria and lebanon since the beginning of the Syrian Civil War in 2011 is also concerned about the Russian move, that could affect IAF operations over Lebanon as well as Syria. Moreover, the de-facto established Israeli freedom of action over Lebanon would be severely degraded, given Russian manned and equipped assets guarding the Lebanese airspace, covering Iranian-backed military buildup in Central and South Lebanon. Israel’s concern of such potential conflict drove Prime Minister Benjamin Netanyahu to meet Vladimir Putin in Moscow on Sept 21. In its effort to deconflict operations of Russian, Iranian, Iraqi and Coalition forces operating over Syria, Washington has opened direct communications lines with Moscow, while Russia deployed liaison officers to Iraq.