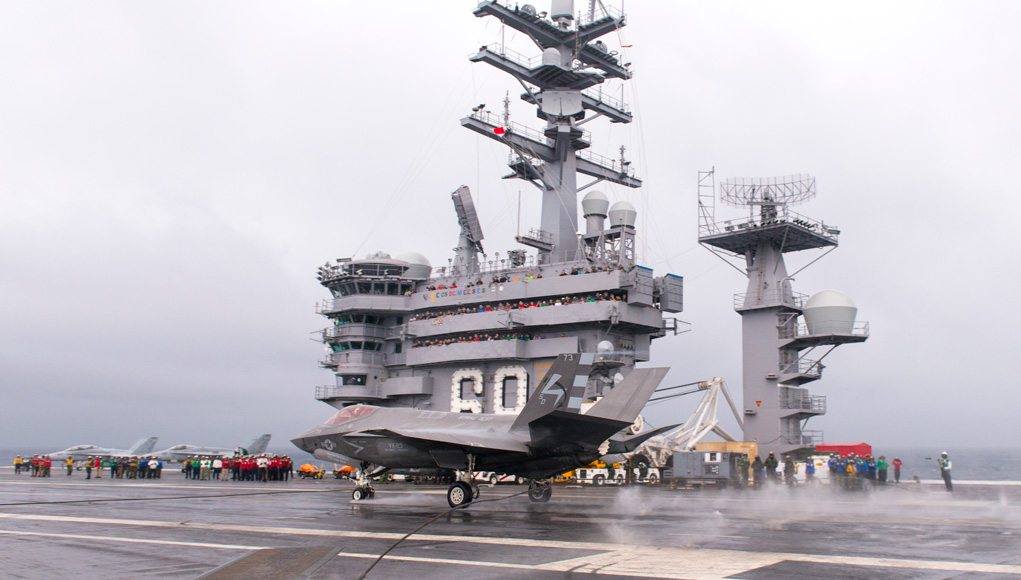 “These sea trials will further expand the F-35C’s flight envelope,” said Lt. Gen. Chris Bogdan, F-35 Program Executive Officer (PEO). “Over the next few weeks we’ll learn more about what it takes to integrate next generation fighters aboard aircraft carriers. The testing we’re doing today will prepare us for next year’s final at-sea developmental test and keep us on track to support the Navy’s 2018 initial operational capability date.”

The F-35C will perform a variety of operational maneuvers during DT-II – including catapult takeoffs and arrested landings – while simulating maintenance operations and conducting general maintenance and fit tests for the aircraft and support equipment. Following the analysis of DT-II test data, the team will conduct a thorough assessment of the F-35C’s performance in the shipboard environment before advising the Navy on any adjustments necessary to ensure that the fifth-generation fighter is ready to meet its scheduled IOC in 2018.

Naval aircraft undergo DT-I, -II and -III test phases in order to ensure the development of aircraft that meet specifications and to identify mission critical issues sufficiently early in the test phase to deliver fully capable aircraft in time for their scheduled initial operating capability (IOC).

The F-35C is the Navy’s and Marine Corps’ carrier-suitable variant (CV) of the F-35. The aircraft introduces at-sea stealth capabilities the US Navy never had before. Other unique attributes of the new fighter offers are fused targeting and situational awareness sensors, enabling the stealth fighter to maintain ‘radar silence’ while engaging its targets. The F-35C is expected to reach Initial Operational Capability (IOC) in 2018.