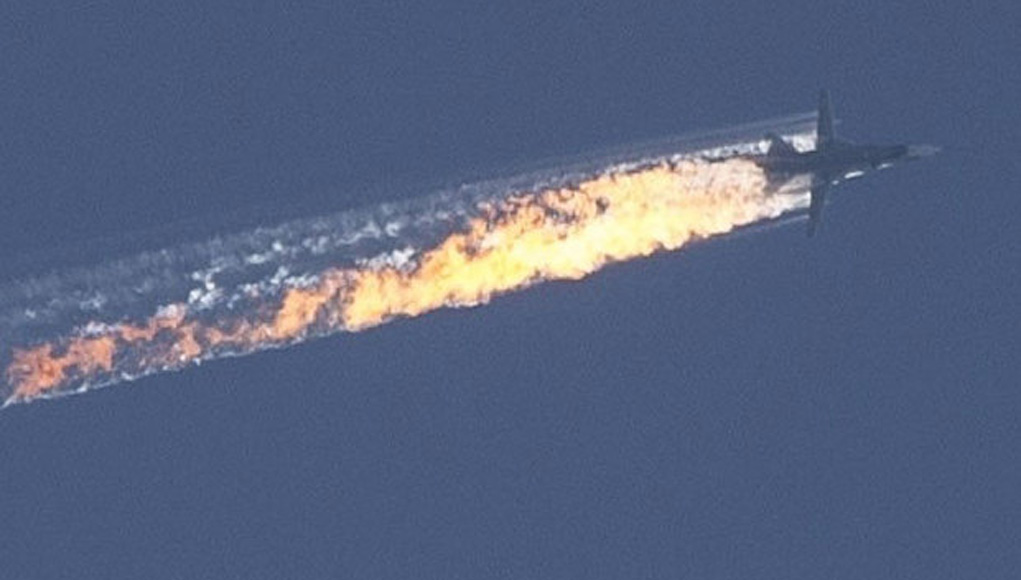 A Russian Su-24 strike aircraft was shot down today by Turkish Air Force F-16s. The Turks claim the Russian plane was intercepted on the Turkish side of the Turkish-Syrian border. The Russians say it was a deliberate attack against a Russian jet flying south of the border. According to Turkish authorities, the intruder was engaged by an air-to-air missile fired by an F-16 after ignoring repeated, internationally-recognized signs to identify itself and turn back. Defense officials in Moscow have confirmed the loss of one of their jets operating in support of the Syrian regime. The aircraft was at an altitude of 6,000 meters when it was hitby the Turkish missile.

Russian military sources confirmed that a two-jet formation was in the area, returning to their operating base at Hmeymin after a combat mission against ISIS. One of the jets turned back, while the other was shot down. Both crewmembers ejected from the burning plane. The pilot was shot by Syrian Turkmen rebels, the navigatir escaped and was rescued by a daring Combat Search and Rescue operation that lasted 12 hours. One of the SAR helicopters sent to rescue the pilots took fire from the ground and forced to perform an emergency landing. Once landed, the helicopter was hit again by a TOW guided mossile, killing one of the marines on board.

A Russian Su-24 was downed today by Turkish F-16 jets. Photo: Anadolu Agency/Getty Images[/caption]The Turkish military said the plane was warned 10 times in five minutes. Moscow insisted that the aircraft never left Syrian airspace during its mission – contesting Turkish claims that it was shot down after it crossed into Turkish territory.

Russian President Vladimir Putin said the downed Su-24 was no threat to Turkey, as it was on a mission to bomb Islamic State targets. The Russian president warned that the attack on the Russian warplane would have “serious consequences” for Russian-Turkish relations, and said that Russia expects NATO to provide explanations about the incident.

This is a 365 word abstract of 834 words article. Please join our sucbscribers for the full version