India’s Defence Research and Development Organisation (DRDO) successfully conducted test firing of new penetration-blast and Thermobaric (TB) Ammunition for 120mm tank guns used on the indigenous Arjun Tank at the Chandipur test range in Odisha, India. The new round that employs a fuel-air explosive (thermobaric) chemical compound is designed to penetrate and defeat ballistic armor or fortification (such as concrete bunkers) and explode inside the target, devastating it from the inside with the thermobaric enhanced-blast effect. The PCB (Penetration-Cum Blast) round was developed at the DRDO Armament Research and Development Establishment (ARDE) High Energy Materials Research Laboratory (HEMRL) in Pune, which is engaged in the development of fuel-air and thermobaric explosives for application in guided missiles and bombs.

The MOD announcement said the trials were conducted jointly with Army and were aimed to demonstrate the effectiveness of the ammunition on derelict (T55) tanks fitted with instrumentation to measure the shocks, blast pressure and temperature at various locations and on advanced imaging systems. 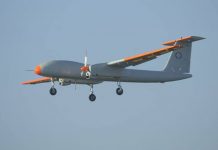