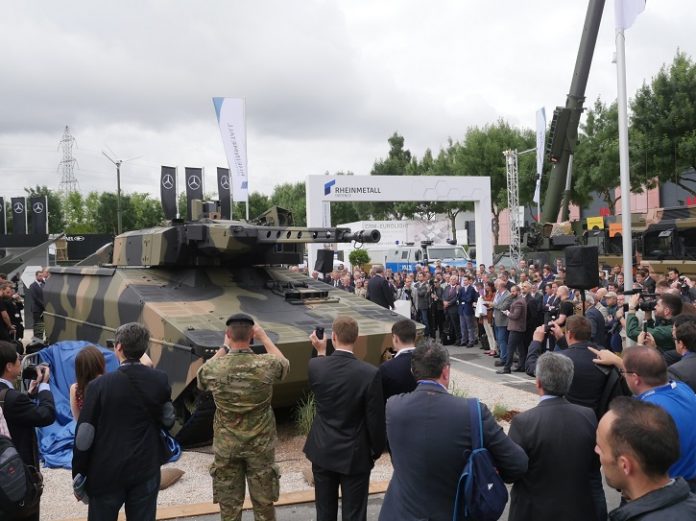 Rheinmetall unveilled today the Lynx, its latest tracked combat vehicle at the Eurosatory defense exhibition in Paris. The new vehicle is one of two models developed by the German company, positioned as an independently developped, tracked combat system aimed primarily to compete in export markets.

While the Puma is designed to address the specific (and uncompromised) requirements of the German Army, the Lynx is designed as a more flexible and affordable platform, availabe in two hull sizes. One is designed as the Puma, to carry six ad eight infantrymen while the other is longer and adaptable to internatoinal standards.

The variant unveiled today at Eurosatory is the Kettenfahrzeug (tracked vehice in German) KF31 that can carry a squad of six, along with three crew members. The longer variant designated KF41 can carry eight soldiers. Both are equipped with the Lance turret system, an off the shelf Rheinmetall product, mounting a 30/35mm cannon with firing anti-tank and high-explosive airburst ammunition, providing the crew with firepower, effective up to a distance of 3,000 meters, even on the move.

The manned turret also has a coax 7.62 machine-gun fitted with a unique barrel replacement system that can sustain continuous firing over extended period, by replacing the machine gun barrels on demand. This innovative system enables the crew to continue fighting under armor without exiting the protected vehicle to replace barrels.

The protection system defends the Lynx from various threats, including ballistic, RPG and mine or IED blast. Spall liner is emplaced inside the vehicle, reducing vulnerability to ballistic or chemical attack. The company also offers the use of hul-mounted active defense systems (ADS), improving the vechicle’s survivability againt RPGs and other tandem, High-Explosive Anti-Tank (HEAT) attack.

The Lynx can also be equipped with another remotely operated weapon attached to the commander’s independent, panoramic sight, providing the commander with the option to engage targets in sight independently of the gunner’s aiming. (in what company officials call ‘killer-killer’ capability – an evolution of traditional ‘hunter-killer’ function of standard independent commander’s sights. The turret also mounts a launcher with two Spike multi-purpose guided missiles, for long range engagements.

Lynx is designed with its rear area reserved for mission equipment and carrying space for an infantry squad. This means that the engine is positioned in the front of the vehicle. Nevertheless, tIt is fitted with a wide access ramp for rapid access and dismounting. Two hatches are provided for infantrymen to be able to secre the vehicle’s rear area. The engine exhaust is channelled backwards, diluted with colder air to reduce the vehicles’ thermal signature. The acoustic signature of the diesel engine is also reduced to levels considerably lower than standard AFVs.