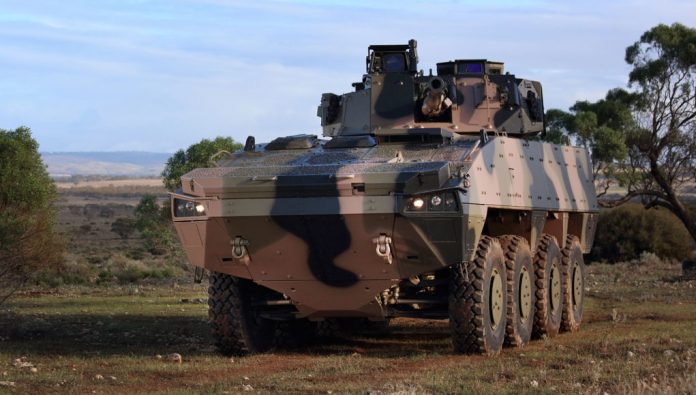 The two AFV shortlisted are the Boxer and AMV-35, both are 8×8 wheeled vehicles, offering better protection and mobility over the current ASLAV, and equipped with a manned turret mounting an automatic gun. The Australian requirement is for 225 vehicles in seven variants.

The acquisition is part of the larger Land 400 program designed to replace Australia’s entire fighting vehicle fleet. The selection comes at the completion of the review of opportunities to improve Australian industry involvement in , LAND 400 Phase 2. In addition to industrial participation, all options will be required to include through-life support in Australia.

The Boxer is jointly produced by Artec, a German-Dutch contractor. Boxer CRV is fitted with the Lance turret mounting Rheinmetall’s Mk-30-2 30mm cannon fitted with the company’s distinctive airburst ammunition capability. The 30mm gun can be upgraded to 35 mm cannon.

Rheinmetall Defence has offered the Commonwealth the latest version of the BOXER 8X8 vehicle that is fitted with the in-service Lance turret and a growth path that includes a 35 mm main gun and the Northrop Grumman command, control, communications, computers, intelligence, surveillance and reconnaissance (C4ISR) architecture.

The turret is designed with integrated launchers for Spike missiles. The modular vehicle is designed with unique upgradeable armor that enhances the vehicle’s survivability against the full spectrum of battlefield threats including small arms, heavy machine guns, mines, NBC contaminants and Improvised Explosive Devices (IEDs).

Rheinmetall has recently unveiled a version of the Boxer, fitted with a version of its Active Defence System (ADS), extending the vehicle’s protection against Rocket Propelled Grenades (RPGs) attack beyond the statistical protection provided by passive armor.

The AMV-35 is proposed by BAE Systems. The hull was designed and is produced by the Finnish based company Patria. The E35 turret mounting the Bushmaster III 35mm cannon was developed for BAE’s CV-9035 is a product of Sweden-based BAE Systems Hägglunds division.

The two were selected from a list of contenders that also included a modern variant of the Light Assault Vehicle (LAV-6) from General Dynamics Canada and the Sentinel II, based on the Singaporean Terrex 3, proposed by Singapore Technologies and Elbit Systems. The French manufacturer Nexter withdrew from the competition following the Australian decision to limit their selection to operationally proven systems. Nexter proposed an upgraded version of VBCI , equipped with the new T40 turret mounting the 40mm CTI cannon that has been selected by the French and British military but not been fielded yet.

The tender evaluation was expected in March this year but delayed to conduct a review of the acquisition process. “The review undertaken by Deloitte Australia found clear alignment between the LAND 400 Phase 2 tender evaluation process and the policy direction and priorities of the 2016 Defence Industry Policy Statement.” Pyne said. The review was completed last month.

“The Turnbull Government is committed to maximising Australian industry involvement during the next stage of the evaluation process and Defence will continue to work collaboratively with companies as part of a broader Australian industry program,” Pyne added.

Both Patria and BAE Systems Hägglunds have transferred technology involved in the production of the AMV and the E35 turret to several other countries, successfully demonstrating capability transfer and the in-country economic advantages this brings, including long-term sustainment, upgrade and maintenance activities.

“BAE Systems will produce the AMV35 in Australia if we are selected as the successful tender. This will secure and retain in-country capability and contribute significantly to the Australian economy throughout the expected 30-plus year life and sustainment of the vehicles.” BAE Systems Australia Chief Executive Glynn Phillips commented.

The Defense ministry will facilitate workshops around Australia where local industry can showcase their capabilities to the international manufacturers that are leading the bids for the LAND 400 Phase 2 tender. These activities will result in the development of costed options for differing levels of Australian industry participation in the acquisition and support of LAND 400 Phase 2, including Australian-produced or assembled components as well as local manufacturing of foreign systems.