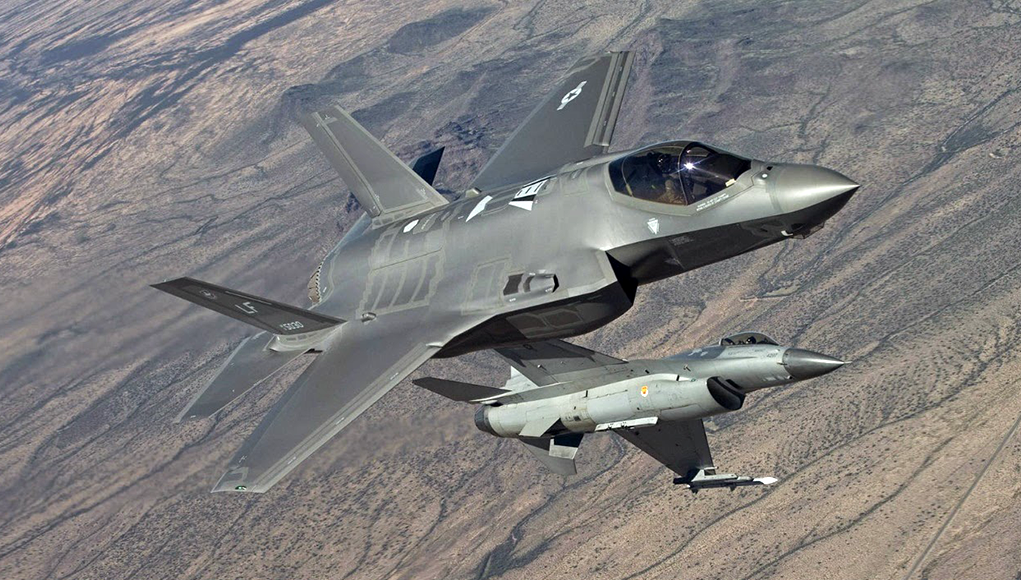 The US Air Force and Lockheed Martin’s advanced projects unit – the ‘Skunk Works’, have completed a series of flight tests demonstrating the teaming of a manned and unmanned fighter jets, participating in mock combat operations. During the flight demonstration, an experimental F-16 aircraft acted as a surrogate Unmanned Combat Air Vehicle (UCAV) autonomously reacting to a dynamic threat environment during an air-to-ground strike mission. The demonstration success included three key objectives:

For the recent phase designated “Have Raider II” Skunk Works teamed with the US Air Force’s Research Laboratory (AFRL), the Pilot School and Calspan Corporation.

“This demonstration is an important milestone in AFRL’s maturation of technologies needed to integrate manned and unmanned aircraft in a strike package,” said Capt. Andrew Petry, AFRL autonomous flight operations engineer. “We’ve not only shown how an Unmanned Combat Air Vehicle can perform its mission when things go as planned, but also how it will react and adapt to unforeseen obstacles along the way.”

Acting as a surrogate UCAV, an experimental F-16 autonomously reacted to a dynamic threat environment, during a simulated strike mission

The two-week demonstration at the Test Pilot School at Edwards Air Force Base, California, is the second in a series of manned/unmanned teaming exercises to prove enabling technologies.

The Air Forces’ Loyal Wingman program foresee the techniques, tactics, and procedures of controlling semi-autonomous missions of UCAVs by pilots of manned fifth Generation fighters (F-22/F-35). Such platforms should be able to ‘play’ in both air/air and air/ground scenarios, carrying weapons and flying the more risky parts of the mission, thus increasing the survivability and effectiveness of the manned platforms. QF-16s (unmanned targets) are considered the most cost-effective platforms for this mission, although being a Fourth Generation fighter with no stealth capability would compromise a mixed manned-unmanned strike package. Apart from the tried and tested F-16 the Air Force is also testing other target aircraft, some designed specifically for attack missions – such as the UTAP-22 built by Kratos.

The first demonstration, ‘Have Raider I’, focused on advanced vehicle control. The experimental F-16 autonomously flew in formation with a lead aircraft and conducted a ground-attack mission, then automatically rejoined the lead aircraft after the mission was completed. These capabilities were linked with Lockheed Martin automatic collision avoidance systems to ensure safe, coordinated teaming between the F-16 and surrogate UCAV.

“The OMS architecture used in Have Raider II made it possible to rapidly insert new software components into the system,” said Michael Coy, AFRL computer engineer. “OMS will allow the Air Force maximum flexibility in the development and fielding of cutting edge autonomous capabilities.”

Effective manned/unmanned teaming reduces the high cognitive workload, allowing the warfighter to focus on creative and complex planning and management. Autonomous systems also have the ability to access hazardous mission environments, react more quickly, and provide persistent capabilities without fatigue. Each drone will have onboard autonomy sufficient to complete all basic flight operations untethered from a ground station and without full-time direction from the manned lead.

For future applications of the Loyal Wingman concept, the Air Force is considering employing several drones with each manned fighter jet. The flight will use dedicated processors that will be able to assess the operational scenario based on each platforms’ sensors and decide the course of action for the group of drones. A prototype of such system is under development at the University of Cincinnati. It employs artificial intelligence and fuzzy logic techniques known as ‘Alpha’ has demonstrated in simulations capabilities superior to well-trained fighter pilots.