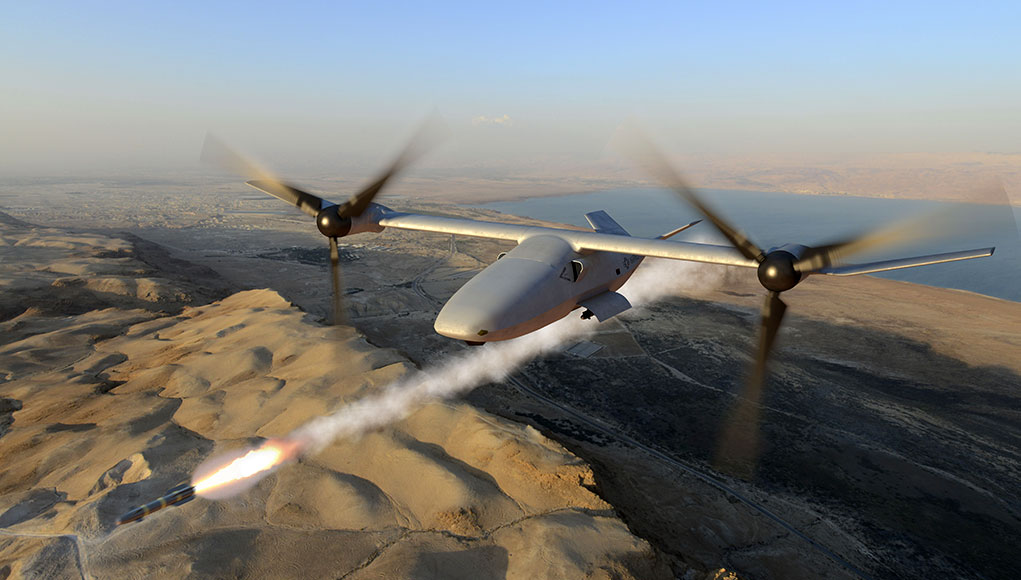 Unmanned Aerial Vehicles (UAVs) will be the most dynamic growth sector of the world aerospace industry this decade, more than tripling in the next decade, a new market research by the Teal Group predicts. According to Teal analysts, the soaring demand for the next generation of unmanned combat aerial vehicles (UCAVs) and worldwide military adoption of Remotely Piloted Aircraft Systems (RPAS) are two major factors driving this growth. The study reflects the rapid growth of interest in the UAV business by covering almost 60 U.S., European, Asia-Pacific, and Israeli companies, and reveals the fundamental reshaping of the industrial environment as UAV technology proliferates worldwide.

Teal Group’s 2017 market study estimates global spending within the next decade at over $100 billion. UAV production will more than double, from current worldwide annual UAV production of $4.2 in 2017 to $10.3 billion in 2026, totaling a spending of $80.5 billion in the next ten years. Military UAV research spending would add another $26 billion over the decade.

“The UAV market continues to soar,” said Philip Finnegan, Teal Group’s director of corporate analysis and an author of the study. “Increasing trade in costly high-altitude, long-endurance systems, demand for armed UAVs, the development of the next generation of unmanned combat systems, and potential new applications such as missile defense continue to drive the market.”

“The Teal Group study predicts that the U.S. will account for 57% of total military worldwide RDT&E spending on UAV technology over the next decade and about 31% of the military procurement,” said Teal Group senior analyst Steve Zaloga, another author of the study. The larger, higher value systems procured by the United States help drive the relative strength of the US market over the decade, but other areas such as Asia-Pacific are growing more rapidly.

Apart from the U.S., Asia-Pacific represents the second largest market, followed by Europe. In contrast, Africa and Latin America are expected to be modest markets for UAVs. 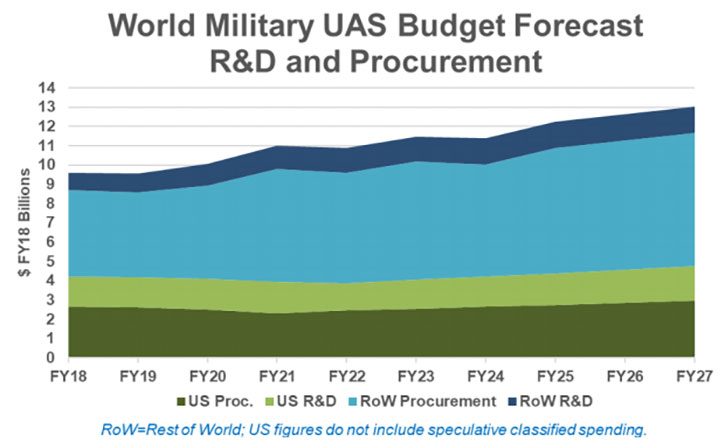 As part of the market coverage, the study estimates the demand for payloads will more than double in overall value from $3.6 billion in FY17 to $7.5 billion in FY26. Steady growth will occur in the “default sensor” EO/IR market, following up-and-down funding in recent years as several legacy endurance UAV sensor programs ended. Teal forecasts a near-term rise from $1.17 billion in FY17 to $2.0 billion in FY22, led by funding for adding U-2 sensors to Global Hawk, by HD upgrade programs for Reapers and Gray Eagles, and by new production for classified UCAVs and mini/nano-UAVs.

UAV payloads including Electro-Optic/Infrared Sensors (EO/IR), Synthetic Aperture Radars (SARs), SIGINT and EW Systems, and C4I Systems. According to Dr. David L. Rockwell, Teal’s lead electronics analyst, many of these payloads fall under classified programs that are rarely covered in market reports. Over the next decade, these programs will add up to $30 billion that will make up more than half the UAV sensor market. 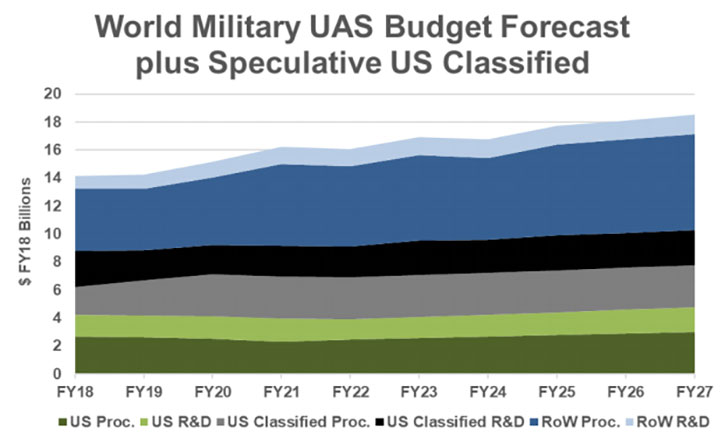 “It is vitally important to forecast these programs, as they make up more and more of the available market, even though they are in none of the documents or online sources.” Rockwell said, adding that speculative ‘available’ forecasts – totaling more than $30 billion for payloads through FY26 – are intended to give early warning of programs that are not yet in DoD budgets or under public discussion. “We’ve put this together through my 23 years at Teal Group, and it’s just not available online.” Rockwell concluded.

Along with EO/IR, comprehensive coverage of the sea change in the radio frequency (RF) market also is included, with UAV radars forecast to grow from $825 million in FY17 to $2.1 billion in FY26, and SIGINT and Electronic Attack (EA) markets to grow from $750 million to $1.7 billion (with a 27.7% EA CAGR from FY17 to FY22 to begin major UCAV systems). The emphasis on – and funding for – different sensor types is already changing as geopolitics evolve back to A2/AD threats and near-peer opponents in Asia and Eastern Europe, according to Teal’s study.