For the long-term, as machines become intelligent and autonomous, human-machine and machine-machine teaming will become the norm in military operations, a trend that military planners already address in their forecast, research and development roadmaps.

Robotic platforms already team to cooperate on specific missions, such as surveillance indoors, where groups of ground vehicles and aerial robots cooperate on a common goal to scan an indoor space as quickly as possible using the least number of assets and time. Similar cooperation begins to appear in certain search and rescue operations. These applications highlight efficiency and are suitable primarily for security, intelligence gathering, surveillance and reconnaissance (ISR) missions on the military, homeland security and civilian applications.

Multirotor drones are not too efficient in energy consumption, and their endurance is often measured in minutes. When persistence is a requirement, swarm operations can rely on rapid power replenishment in the field, in the form of autonomous rapid charging pads or docking stations scattered in the area. Such products are already available commercially, for example, from the German company SkySense, Estonian Eli Airborne Solutions and Israel’s Airobotics. 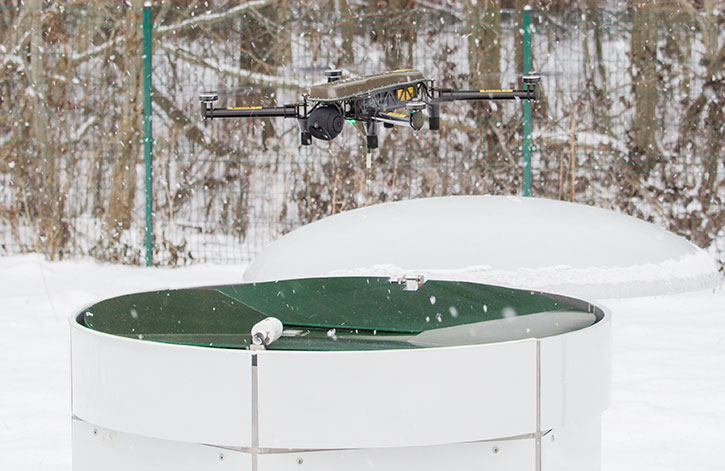 In addition to charging pads that can rely on solar panels, these companies provide ‘droneports’ or docking stations that contain a charging pad and shelter, enabling storage of the drone in high readiness under all weather conditions. A different concept recently demonstrated in testing is D-NEST, developed in Israel by SafeNet. D-NEST is a rapidly deployed landing mat that is equipped with localization, communications, and electrical charging elements – all necessary to sustain continuous drone activity in rural or urban areas. The system is foldable, carried by a single person and can be deployed in minutes on a flat surface or a roof and is able to autonomously support any drone compatible drone, thus relieving soldiers from the need to exit a protected location to service those drones. Such system would be highly suitable for operation in an urban war zone is, where the forces require constant UAV support that often exposes drone operators in the open area.

Another concept being explored by the US Marine Corps is the deployment of a robotic unit acting as an organic element with the platoon. The Study of Autonomy prepared in 2016 by the Defense Science Board recommended that such drone ‘squadrons’ will comprise between 10 and 40 aircraft of several different types: Some will carry sensors (visual, thermal, or even acoustic are suggested), some will have jamming or communications payloads, others will carry weapons. Using EW payloads carried closer to their designated targets, drones will be able to deploy jammers, spoofing transmitters, and digital radio frequency memory (DRFM) transceivers closer to the enemy, becoming powerful electronic attack weapons.

Such units will leverage the drone’s autonomous capabilities to support the platoon without relying on specialist operators controlling the drones. Operators will interface with the drones using standard tablets or smartphone like devices, or by hand gestures or voice commands. The drones will share the blue force tracking (BTF) network to maintain situational awareness of the battlespace, they will perform routine surveillance and overwatch, to deliver breaking alerts to the squads that could be threatened. In addition, warfighters would have access to relevant video streams or request certain services. Drones that will be armed with weapons could be ordered to prosecute targets under human supervision. However, for all remaining tasks they will be autonomous, and may not be in constant communication with the operator or each other, thus they can work where communications are jammed or intermittent.

Such squadron would be launched at the start of a mission and would remain overhead until it was completed, therefore, such aircraft should be able to loiter overhead up to 12 hours on a shift. In practice, individual drones could be replaced by fresh ones, while those low on juice return to replenish. Such a method could maintain persistence over the battlespace practically indefinitely According to the report, a three-person ground crew should be enough to launch, recover, refuel and re-arm the drones.

Drones could be operated individually or as cohesive formations – or “swarms”. The report emphasizes that the swarm should be omnipresent and able to respond instantly without the usual delay associated with calling up air support. In fact, the first the squad members may know about a threat is when the drones alert them to its presence and request permission to engage. Other types of action, such as jamming or spoofing enemy communications, may be entirely automated. Autonomous UAS support will provide immediate response to unit ISR, EW, and strike needs. In addition to these core capabilities, heterogeneous autonomous UA can further improve unit effectiveness by providing blue force communications, PNT, and blue force tracking.

Heterogeneous autonomous UAS squadrons that are capable of performing missions without reliable communications will enable missions in denied environments or when stealth requires a communications blackout. The drone swarm will be able to maintain a resilient command and control network facilitated by the use of an ad hoc, delay and disruption tolerant network that will allow each UAS to work with local cliques of peers and users when end-to-end connectivity is unavailable, and to use temporary local communications links to coordinate asynchronously. Such service will also share a common operating picture in an asynchronous, ad hoc and decentralized process enabling sensor fusion and delay tolerant information exchange.

Launched and recovered from a central base or ship, 10 to 40 medium-sized heterogeneous, autonomous UA could provide a persistent cover to small units operating over large areas. The UAS squadron would provide services to line units on patrol or locate in forward outposts, at speeds unattainable by human-piloted aircraft by accepting tasking from and providing services directly to the frontline user.

Other applications using a large number of drones exploit the overmatch such swarm offer over a conventional adversary. While people often think about swarms as simply being large collections of robots, swarms, in fact, have five defining characteristics: number, agent complexity, collective complexity, heterogeneity, and human-swarm interaction.

Swarms could employ many identical drones (homogeneous swarms) or different types of vehicles (heterogeneous drone swarms), in which individual robots carry out different roles – pathfinder, sensor, communicator, leader, and striker. Each member of the swarm has basic intelligence and collaboration, with a standard set of skills or specific ones, in heterogeneous swarms, of role-playing robots.

SWARMs consist of mini-robots that operate autonomously, where missions are lead either by some of the drones or under human supervision. Launching such a drone swarm is an operational challenge that requires specially prepared logistics – using airborne dispensers, cargo munitions, launch tubes from surface launchers or subterranean or undersea launchers. Once the drones are airborne, they should be able to execute their mission as quickly and efficiently as possible, given the limited energy resources they have on board. Harnessing the swarm to carry out missions under an operational plan is a major challenge currently explored in series of ‘Swarm Challenge’ wargames managed by DARPA, the US armed forces, research and academic institutions.