Lockheed Martin selected Raytheon to develop and deliver the next generation Distributed Aperture System (DAS) for the F-35 fighter jet. The selection is part of the cost reduction initiative by the aircraft prime contractor, to reduce costs.

As part of this plan, Lockheed Martin conducted a competition among several manufacturers to offer a more competitive alternative to the original AAQ-37, developed and manufactured by Northrop Grumman. The Raytheon-built DAS will be integrated into F-35 aircraft starting with Lot 15 aircraft, expected to begin deliveries in 2023. By that time Lockheed Martin is expected to deliver 900 F-35s, equipped with the original system. To date, Northrop Grumman has supplied well more than 2,000 DAS cameras.

The new system is expected to achieve 45 percent reduction in unit recurring cost and as much as half the operations and sustainment cost, bringing the total savings to more than $3 billion over the life cycle of the program. The DAS collects high-resolution from six infrared cameras positioned around the aircraft, to provide the pilot real-time 360 degrees imagery, displayed to the pilot’s helmet, allowing pilots to see the environment around them – day or night. As a state of the art system, the new DAS will be much more reliable (x5 improvement) and offer improved performance (x2).

“The supply chain competition for the next generation F-35 Distributed Aperture System resulted in significant cost savings, reliability and performance improvements,” said Greg Ulmer, Lockheed Martin vice president and general manager of the F-35 program. “We are aggressively pursuing cost reduction across the F-35 enterprise and this initiative is a clear demonstration of our unrelenting commitment to reduce costs and deliver transformational capabilities for the warfighter.” 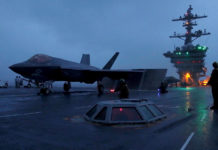