The US Air Force’s latest unmanned aircraft system (UAS), XQ-58A Valkyrie demonstrator completed its inaugural flight March 5, 2019, at Yuma Proving Grounds, Arizona. The Valkyrie is a long-range, high subsonic unmanned air vehicle designed to operate autonomously or in cooperation with manned aircraft as part of the Air Forces’ ‘Loyal Wingman’ concept. The Air Force Research Laboratory partnered with Kratos Unmanned Aerial Systems to develop the XQ-58A. According to the designer, the 30 ft (9 meters) long Valkyrie has a range of more than 3,000 nautical miles (5,556 km)

Based on Kratos’ low-cost target aircraft design philosophy, Valkyrie is part of the Air Force Research Laboratory’s Low-Cost Attritable Aircraft Technology (LCAAT) portfolio, which has the objective to break the escalating cost trajectory of tactically relevant aircraft. The objectives of the LCAAT initiative include designing and building UAS faster by developing better design tools, and maturing and leveraging commercial manufacturing processes to reduce build time and cost. It took Kratos and the Air Force little over 2.5 years to develop Valkyrie, from contract award to the first flight. “XQ-58A is the first example of a class of UAV that is defined by low procurement and operating costs while providing game-changing combat capability,” said Doug Szczublewski, AFRL’s XQ-58A Program Manager. According to the Air force, by teaming unmanned assets like the Valkyrie with an F-35 or an F-22, each manned platform can cover more space at a lower cost point.

Unlike the UTAP-22 Mako that was used in flight tests with 3 and 4 GEN fighters the design features on Valkyrie are likely to reduce radar and thermal signature, better preparing it for operations with stealth aircraft. Among those features are the trapezoidal profile, canted tails, low-profile dorsal air intake and engine exhaust, serrated access panels, and weapons bay doors.

Developed for runway independence, the aircraft was launched and behaved as expected on its first flight that lasted 76 minutes. The XQ-58A has a total of five planned test flights in two phases with objectives that include evaluating system functionality, aerodynamic performance, and launch and recovery systems.

Previous experimentations were done with UTAP-22 Mako, another platform developed by Kratos. A derivative of Kratos’ BQM-167 aerial target drone, the platform provides a highly maneuverable unmanned aircraft, capable of carrying and operating weapons and advanced sensor systems. It demonstrated the capability to operate in synch with manned formations. It has flown in multiple large-scale military exercises and has been cleared for export. 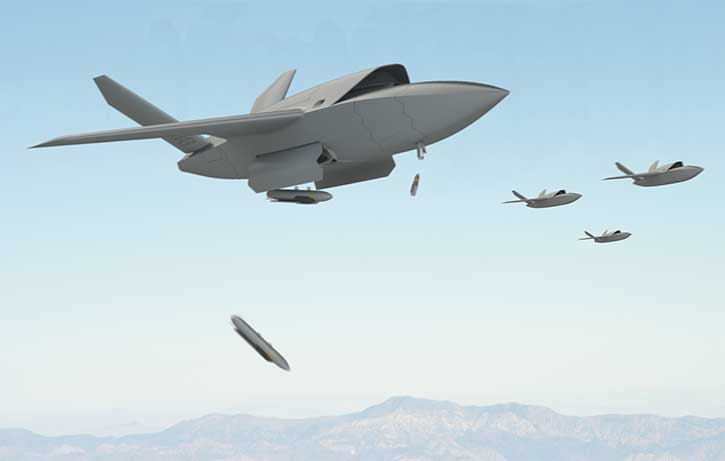