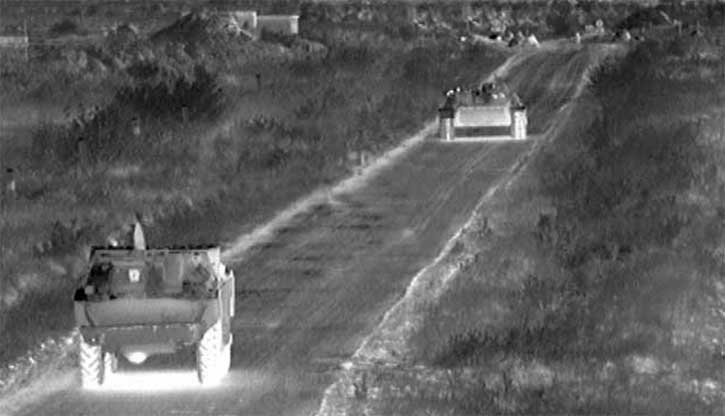 Modern Armored Fighting Vehicles (AFV) are designed to provide the firepower and protection to overmatch adversaries, whether it is enemy tanks, anti-armor or other kinetic and non-kinetic weapons, from land, subsurface or the aerial threats.

Protected behind heavy armor, crewmembers need effective vision systems to obtain situational awareness and perceive their surroundings at close quarters. Since their creation AFVs relied on optical gear such as periscopes and telescopes. Today, when AFVs are required to fight in the day, night and under adverse weather and limited visibility conditions, human vision is not enough. Electro-optical systems, particularly thermal vision equipment is fielded with new platforms and as part of modernization and upgrades for existing AFVs, preparing them to fight and win in the modern battlefield.

Upgrading entire fleets of AFVs is costly and complex but is essential to prevent the weapon systems obsolesce. Most combat vehicles delivered since the 1960s already have optronic systems of some type. Many are still in service and undergo periodical modernization to maintain combat effectiveness. While new optronic systems and fire controls are often too costly for aging platforms, armies may consider upgrading the optronic systems themselves, to enhance AFV performance within a limited budget.

Such upgrades were developed by Israel’s Thermal Imaging System (TIS) provider Opgal. Among these systems are upgrade kits for commander and gunner sights and new situational awareness systems for the driver and crew.

The Gunner Sight Upgrade Kit enables increased visual range for target identification and acquisition. Based on the Opgal’s EyeR Core AD it enables the gunner a clear view of the target under limited visibility conditions that would be impossible to engage with optical or night vision devices or thermal vision systems of early generations. Comprising an uncooled high sensitivity core that fits right into the existing thermal channel housing, Opgal’s field-tested Gunner Sight Upgrade Kit is designed as a drop-in replacement of I2 and 2nd generation thermal imaging channels, with applications for a range of tanks and armored vehicles of western and eastern origin.

The Commander Sight Upgrade Kit gives armored vehicles crews the ability to reconnoiter, identify and tag targets at greater distances as well as at close range, under limited visibility conditions. As Opgal’s optronic upgrade kits it fits as a replacement for InfraRed (IR) and Image Intensification (I2) channels and comes with a new AMOLED 800×600 eyepiece. Built around the Opgal’s Arbel thermal camera the system maintains both wide and narrow field of view.

The systems are ruggedized to IP65 with optional IP66 to withstand the harshest weather and environmental conditions, vibrations and shock such systems are exposed to when operating in the combat vehicles.

Opgal has developed a suite of thermal imaging systems designed specifically for the new and modernized armored vehicles.

Tavor SM is a rugged, compact and versatile camera that can be mounted on both manned and unmanned vehicles. Comprising a dual channel (day color/thermal) camera that can be used in ground or naval applications, Tavor SA can be paired with various displays as part of the vehicle’s vision system.

Tavor SA kit utilizes four or six ruggedized day/night cameras providing the crew with panoramic video surveillance at low latency video connectivity over an Ethernet link. The video feed from the cameras cover up to 360 degrees and is displayed in real-time in several matrix configurations inside the vehicle, on the crewmember’s display screens.

The DVE is a complete system comprised of a thermal imaging camera, a high-resolution LCD display that fits the available space at the driver’s position, and an adaptor fitting the system to the vehicle. Providing enhanced driver vision under all visibility conditions the DVE kit improves the vehicle’s combat mobility, effectiveness, and survivability in all combat conditions.