Updated Report: On the night of September 14, 2019, several attacks rocked two strategic infrastructure sites in Saudi Arabia. One target was a gas plant near the large oil field at Khurais, recently developed by the Saudi national oil company Aramco. The second was the company’s main processing center and one of the world’s largest oil refineries at Abqaiq (Buqayq), 200 km northeast of Khurais.

U.S. officials blame Iran as the culprit, indicating that the attack was launched from known staging areas across the Persian Gulf. But Iran’s proxy in the Arabian Peninsula, the Yemen Houthi Ansarallah stepped forward to take responsibility.

At the morning after the attack Yemeni Houthi military spokesperson, General Yahya Sari, the attack, called ‘Operation Deterrent Balance 2’ was carried out by ten drones. However, the number of hits (18 in Abqaiq, four in Khurais) contradict the Houthi claim.

According to Houthi military spokesman, Brig. Gen. Yahya Sari the attack was launched from three different positions within Yemen. Three types of drones were used – the Qasef-3, a hitherto unknown type with a range of 1700 km, that can carry four weapons, the long-range Samad-3 UAVs (a small drone with a maximum range of 1,500 km unveiled by Yemen two months ago) and a jet-powered UAVs (Sari did not identify the type but this was likely the Quds-1 cruise missile. The range of that missile has not been confirmed and, according to different sources, could be from 700 to 1,350 km). Each type of missile was launched from a different location. Sari said that some of the UAVs released decoys to jam Saudi radars and distract their air-defenses. Sari provided those details on a press conference on September 18. 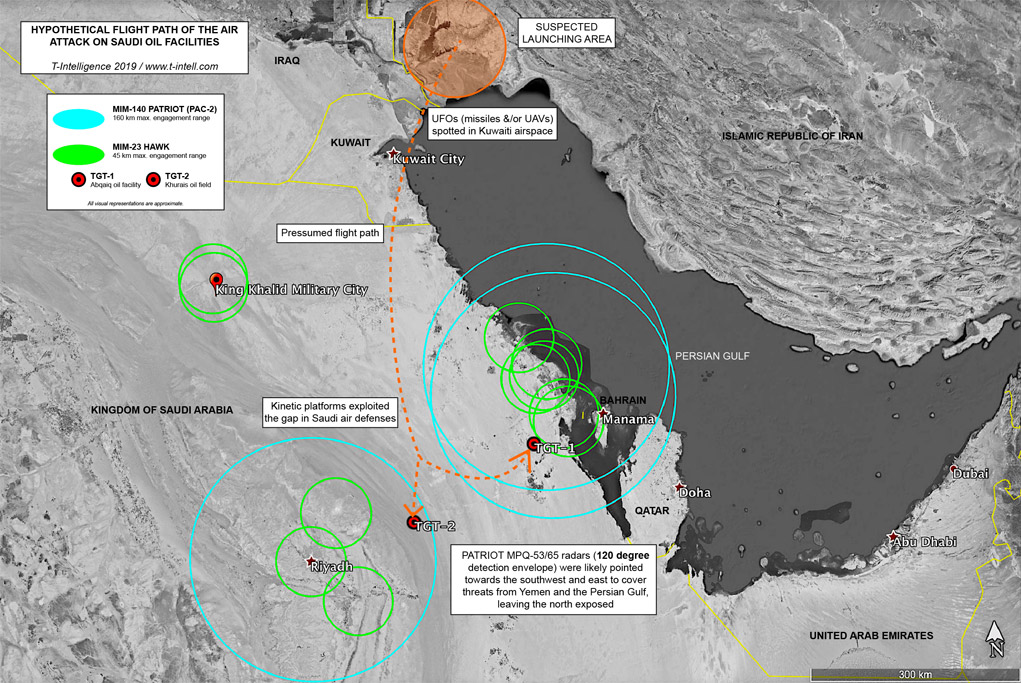 The US and Saudi Arabia pointed at Iran as responsible for the attack, claiming it came from Iran’s territory or from the Iran/Iraq border. On a press conference on September 18, Saudi defense officials confirmed that the weapons that performed were made by Iran. During the conference, the ministry presented the wreckage of seven delta-wing UAVs and two cruise missiles used in the attacks.

Based on the forensic evidence collected at three sites attacked (two this month and another in May this year), the Saudis determined that 18 ‘delta-winged suicide drones’ participated in the attack on the Abqaiq refinery. The exact type of drone was not disclosed. Seven cruise missiles were launched at the oil field Khurais. The Saudis claim these missiles were of the Iranian Ya-Ali type. Only four of the seven missiles actually reached their target.

Defence Ministry spokesperson Colonel Turki al-Maliki said in a press conference in Riyadh a total of 25 drones and missiles were launched at two oil plants in last weekend’s strikes, including what he identified as Iranian Delta Wing unmanned aerial vehicles (UAV) and ‘Ya Ali’ cruise missiles. He said the missiles are known to be used by Iran’s Revolutionary Guards and could not be used by the Houthis due to their limited range.

According to reports from Buqayq, 12 explosions were heard around 03:00 AM local time before multiple fires erupted at the site. The fires raged at least till morning, but according to Saudi sources, by then the fires were under control. Satellite images taken on the morning of September 15th confirm the main fires were put out by the next day. Images from Khurais indicate fires at the Hawiyh gas plant, though and satellite images of that site show no open fires. No casualties were reported by the Saudi authorities. Few minutes before the attack, tweets on twitter reported loud, low flying jets in the area (Kuwait?) and ‘noise of several drones.’

Satellite images released by the US Administrations today indicate 17 points of impact on key infrastructure at the Abqaiq, some of the impacts punctured holes in liquified natural gas (LNG) storage tanks, but, no structural damage that would be caused by a major explosion. Some of the tanks do indicate fire damages.

According to preliminary information, the successful attacks were made by low-flying aerial platforms, although the exact type of those platforms is yet unknown. Some speculations claim the attacks could have launched from Iraq, but this claim hasn’t been substantiated yet.

While the Houthis, who originally took responsibility, have claimed several attacks in Saudi Arabia and the UAE so far, some of them by drones, most of their attacks used ballistic missiles, and more recently, cruise missiles, alas at shorter range. So far most of which targeted the south-western region, only a few have reached as far as Riyadh and the East of the kingdom.

The US blames Iran for the strike, and current assessments are that it came from the north – i.e. – from Iraq. Nevertheless, the short-range from Iran to Saudi Arabia enables cruise missiles and drones to take a long route and reach their targets from any direction, in an attempt to circumvent the coastal-based air defenses and conceal the true origin of the attack. 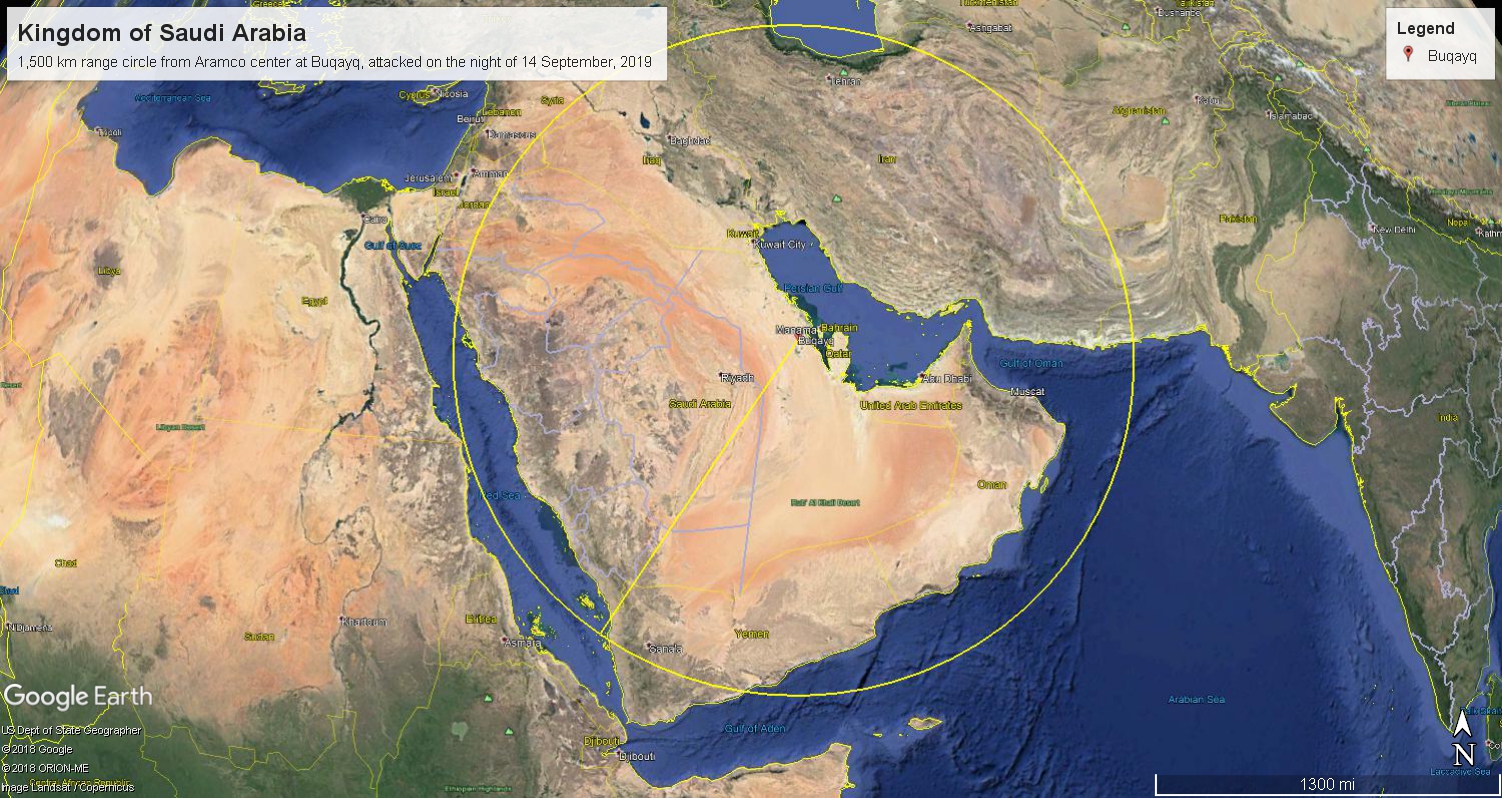 The recent strike was the second attack at Aramco oil facilities in a month. On August 17th the Houthis directed a similar attack at the Shaybah oil field in the kingdom’s South East region, under ‘Operation Deterrent Balance 1’. That attack that used three unmanned aerial vehicles, targeted wells and a refinery. Saudi officials acknowledged the report admitting the attack involved three unmanned aerial vehicles that have caused ‘slight damage’ to a gas station on site. According to preliminary assessments, the recent strike was more severe and effective than past attacks, causing Saudi Arabia to announce it may have to halve the supply of sweet (refined) oil in the coming days.

If the recent attack was carried out by Quds-1 cruise missiles launched from Yemen, the operation indicates a step-change from previous attacks, for the simultaneous use of 10 missiles. The successful attack at an area well protected by several surface-to-air (Patriot and Improved Hawk) sites confirms the effectiveness of cruise missiles even in open and flat terrain. While at least one of the missiles have crashed on the way to the target, most of the missiles managed to break through the defenses and strike the refinery. 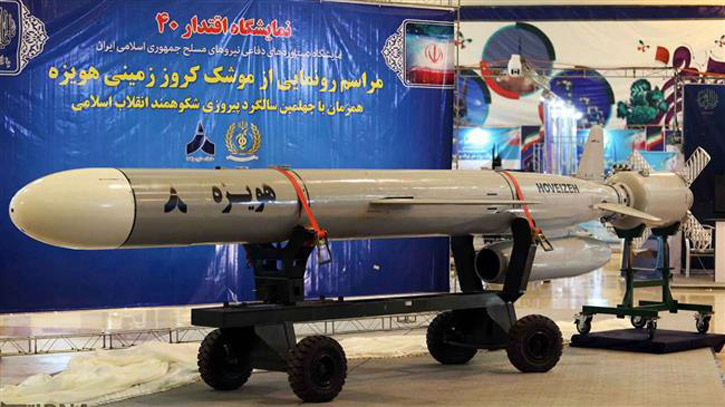