The Iranians are racing against time and air attacks to build and fortify the Imam-Ali military compound near Albukamal, on the Syrian-Iraqi border. In recent months, Iran is constructing a civilian border passage at Albukamal-Al Qiam.

Nearby, a short distance from the commercial gateway, a different compound is being built – designed to store and temporarily accommodate shipments of military hardware, missiles, and ammunition shipped from Iran, to support the Iranian Revolutionary Guards Quds force, through Iraq to Iran’s Shi’ite proxies in Syria and Lebanon.

Once completed, Imam Ali compound will become Iran’s beachhead in Syria, and a central pillar in Iran’s ‘land bridge’ supporting Iran’s proxies in Syria and Lebanon via Irak. Once considered a safe haven for ISIS, Albukamal-Al-Qiam has become a strategic Iranian stronghold thought to be too far for the Israel Air Force to reach, a notion that, so far, allegedly proved wrong.

The compound suffered repeated air attacks in recent months, and at least twice in September. The most recent attacks were recorded on September 9 and 16.

Despite the attacks that destroyed structures and heavy engineering machines, extensive work continues at the compound, as the recent satellite images taken by Imagesat International (ISI) show.

New military infrastructures, including fortifications and revetments, paved access roads and trails within and around the base are clearly seen in the satellite photos. New structures are raised near those destroyed in previous attacks, showing the builder’s commitment to complete and deliver the protected facility despite the attacks.

A fleet of earthmoving and construction machinery is operating on the sites, constructing a hangar and perimeter wall. Some of this equipment was targeted on the recent air attacks. The images show new infrastructures were raised soon after the reported September 9th bombing.

The identity of the attackers, whether they are manned or unmanned strike aircraft is yet unknown. The level of damage is moderate since most attacks were done against empty, incomplete structures and machinery. Given the Iranian determination, to establish the compound, it is expected that the Quds force will soon deploy air defense assets to the compound, to try and deter further attacks. If such a move is made, those air defense assets, including radars and missiles, will certainly become primary targets for future attacks. 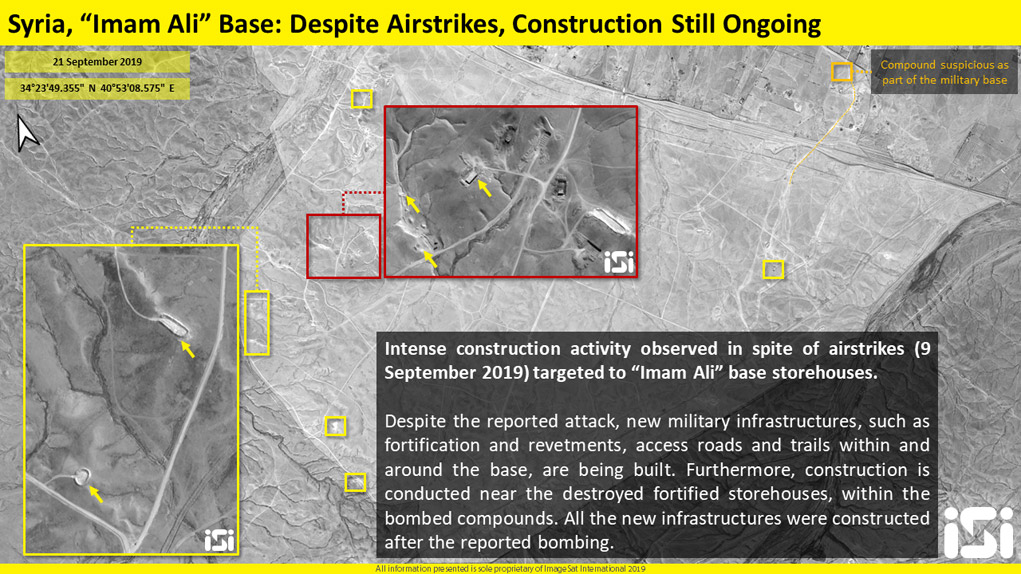