The French Delegation for Armaments (DGA) has qualified the command post vehicle (EPC) variant of the GRIFFON vehicle, destined to equip the Scorpion regiments in the French and Belgian Armies. The Army technical section (STAT) will continue the operational evaluation of the initial three vehicles and their equipment, towards the induction of 20 vehicles with SCORPION regiments by the end of 2020. Ultimately, the SCORPION program calls for the delivery of 333 EPCs, half of which will be delivered by 2025.

The EPC variant of the GRIFFON enables a command section to be deployed quickly at the heart of operations, as part of the combat formation. The force commander can thus conduct an engagement or monitor the progress of a regimental or brigade-level action using on-board command, control and communications (C3) equipment. The arrival of the GRIFFON EPC is complementary to the GRIFFON VTT Félin, with the goal of projecting a joint battle group (GTIA) into a foreign theatre of operations by 2021.

The GRIFFON EPC can accommodate a commander and a gunner in the front seats, and five soldiers in the back. The silhouette of the EPC does not differ from the troop transport (VTT Félin) variant. The few visual differences are the T2 remotely operated turret armed with a 7.62mm caliber weapon and the telescopic mast. Inside, on the other hand, the GRIFFON EPC is equipped to accommodate the command post cole with computer consoles, communications gear, large display screens, a whiteboard, and a printer. The vehicle interior is fully air-conditioned and is adapted to a hot and cold environment, ensuring the functioning of onboard electronics and crew comfort.

The vehicle is equipped with vetronics common to the SCORPION platforms, facilitating the collaborative combat. These include the CONTACT joint data and voice radio, the SCORPION Combat Information System (SICS), the ANTARES optronic system offering the crew a 360° vision of the environment, as well as an Acoustic Localization System providing gunfire location indication (SLA).

The SCORPION program aims to modernize the Army’s combat capabilities and in particular to improve a command through new information resources. The development and production of GRIFFON is undertaken by the temporary group of companies (GME) of multi-role armored vehicles EBMR (Engins Blindés Multi-Rôles), comprised of Nexter, Arquus, and Thales. 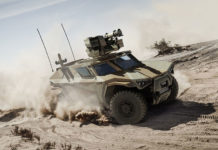