The recent clashes between Israel and terror organizations in Gaza (operation Guardians of the Wall) demonstrated some of the forceful methods a nation-state may employ against aggression from non-state actors. Through the 15-day conflict that erupted after the rocket attack on Jerusalem, Israel Defense Forces (IDF) responded with massive aerial attacks, performed primarily by the Israel Air Force (IAF) using precision-guided munitions. These attacks were directed at terror targets such as buildings known to host command posts; multiple rocket launchers dug in underground points amid populated neighborhoods and industrial facilities that were part of Gaza’s military supply chain.

Little known was the part of IDF land forces’ in the operation. Although Israel refrained from committing its land forces to cross the border, some of the land forces employed unmanned systems to strike inside the enemy area to seek and destroy hidden targets. This was the combat debut of a new capability developed by the IDF that demonstrated the great value of manned-unmanned operations at the tactical edge.

Since 2019 the IDF was busy fielding the Multi-Dimensional Group (MDG), a brigade-size unit manned by elite soldiers and technical experts that tested and operated numerous new equipment to maximize combat agility and firepower. The MDG goal was to empower battalion-size battle groups with unmanned assets, advanced command, control, and intelligence, and precision attack capabilities that could bring to affect its organic firepower and support fires from other units and echelons.

Parallel to the evolution of the MDG, other capabilities evolved in the IDF paratrooper brigade to improve the battalion’s situational awareness, combat maneuvers, and fires. This process began with converting one of the combat support companies from a mortar support unit into a Seek-and-Destroy (S&D) company, equipped with autonomous drones that operate in groups to gather intelligence, acquire targets, and deliver precision attacks.

Initially, the unit employed drone swarms provided by Elbit Systems as the developer and integration partner under the IMOD Defense Research and Development Directorate (DR&DD) and Land Forces Command (GFC) Weapon Systems Directorate. This integration included the provision of weapon systems, drones, networking, and C4I. Israel’s Security Agency (ISA) and IDF specialized units provided the methods and tools to access the vast strategic intelligence resources that enabled the company operators to enhance information and situational awareness at the tactical edge.

The backbone enabling the new capability was the latest version of the IDF network-enabled command, control, and communications and intelligence (C4I), Torch 750 system that now links the division and brigades to the company and platoon level. Supporting the lower echelons, the system runs on apps and tablet computers that give users access to new and relevant intelligence information.

The system gathers real-time reconnaissance collected by the drone swarms and correlates it with relevant intelligence, communications intelligence (COMINT), and cyber, collected and stored in the IDF and ISA intel databases. Integration of all resources enables the creation of a highly detailed and accurate situational picture. Using tools to spot anomalies could indicate the existence of hidden enemies or targets in real-time.

As part of the Battle Management System (BMS) of the brigade and battalions, Torch 750 can commit different elements under the brigade’s command that can deliver effects to engage targets acquired by other elements. The new system also has a tight integration of air support at the battalion level. With this capability, ground forces can direct precision air-launched effects at targets they can see without delay.

Another new capability that S&D companies can leverage is the Iron Sting precision-guided mortar bombs, using GPS and laser homing to deliver precision effects by mortars. In March 2021, the new system completed acceptance tests toward fielding by the IDF. The developer Elbit Systems offers the Iron Sting for all types of smoothbore 120mm mortars, including the Cardom and Keshet mounted on APCs, the Spear carried on 4×4 combat vehicles, or Sling, optimized for commandos. By combining the Iron Sting’s precision and ‘Seek and Destroy’ target acquisition capabilities, the new formations can dominate a battlespace significantly larger than equivalent units with conventional capabilities.

In recent years drones have proved essential for all military operations, providing critical intelligence and pursuing time-sensitive targets. As they loiter over the battlespace, drones can spot enemy activities on the ground, but transferring this insight into action may take hours as the call for fire is processed through the echelons until the order to fire is approved. 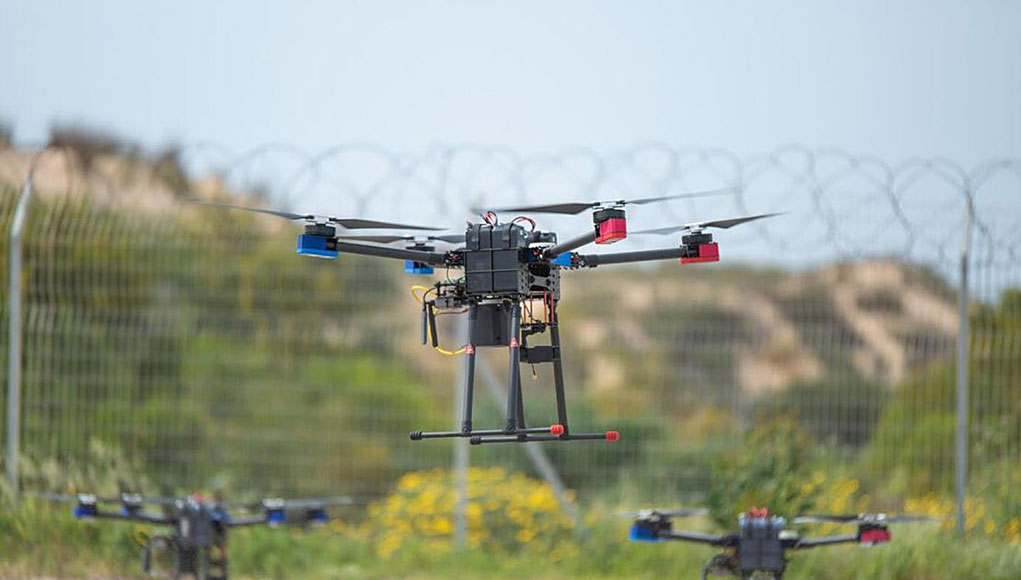 Empowering the company commanders with the means and authority to order and approve an attack by their organic weapons, supporting artillery, naval, or air support enables the IDF to engage targets having a short lifespan. These targets are often exposed by exploiting the friction created through the movement of manned or unmanned combat units in enemy territory.

Although commercial UAVs are often used for experimentation and system development, the IDF opted to employ militarized drones better equipped to operate contested environments, interference, jamming, and deception commonly used against drones. In 2017 Elbit Systems was selected to provide multi-rotor drone systems based on a series of drones developed by its subsidiary Flying production.

One of these platforms is THOR, a multi-rotor VTOL drone that was designed to meet MIL-STD-810 requirements. THOR can fly at altitudes of up to 12,000 ft above sea level (3,660 m), and operate at extreme temperatures (-40 to +65), withstand wind gusts and heavy rain and snow, and resist the penetration of sand or dust. With a mission endurance of 75 minutes, it can operate at a radius of up to 10 km, flying up to 2,000 ft. (600 m) above ground. THOR can carry payloads up to 3 kg, including a high-resolution day/night payload.

THOR is extremely quiet compared with the common commercial drones, even as it flies at the maximum speed of 40 km/h. The drone features real-time datalink and control software designed for military users. It is suitable for operation in urban areas and open terrain with an automatic takeoff and landing capability and autonomous mission flight.

Other drones are purpose-built for specific missions, including persistent surveillance in urban terrain, indoor reconnaissance, and kinetic effects. By sharing a network, autonomous capabilities, and artificial intelligence, the drones operate together as a group or ‘swarm,’ leveraging unique capabilities and efficiencies that conventional means cannot deliver.

On May 6, 2021, as the fighting in the south erupted, the new S&D unit moved quickly to become the first military unit to operate drone swarms in combat. Within few hours, they deployed and fielded this brand-new system, seeking and destroying dozens of hidden enemy targets in complex terrain in rural and urban areas.

A clip from a recent exercise of the MDG showing a micro-drone employing a unique ‘perch and stare’ capability in a dense urban area. Source: IDF Spokesperson.

Within a few days, the new unit brought stunning results. A single company empowered by drone swarms, precision weapons, and comprehensive C4I delivered over 30 missions, destroying dozens of enemy targets several kilometers beyond the border. They were able to locate the enemy in complex urban and densely vegetated rural areas, designate targets, assess those targets at the company CP, strike the targets selected for engagement and perform battle damage assessment (BDA), all that done within minutes by drone swarms.

Following the success of these S&D companies, the GFC recommended converting all combat support companies in regular force to S&D companies over the next year. This new capability will dramatically improve the IDF’s combat effectiveness in dealing with a possible eruption of hostilities with Iranian-backed Hezbollah on the Lebanese border.