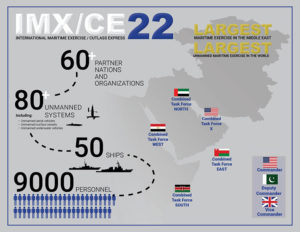 Today, the Middle East’s International Maritime Exercise (IMX) 2022 began. It is the region’s largest maritime exercise, it is led by U.S. Naval Forces Central Command in the Arabian Gulf and the Red Sea. This year the 18-day biennial naval training event is combined with exercise Cutlass Express (CE) led annually by U.S. Naval Forces Europe-Africa in East African coastal regions and the West Indian Ocean. Therefore, the combined training events will span across the Arabian Gulf, the Arabian Sea, Gulf of Oman, Red Sea, and North Indian Ocean. 9,000 personnel from 60 partner nations are participating, with up to 50 ships. The exercise is scheduled to conclude on Feb. 17. This is the seventh iteration of IMX since its establishment in 2012.

According to Vice Admiral Brad Cooper, commander of U.S. Naval Forces Central Command, U.S. 5th Fleet and Combined Maritime Forces, the exercise is a unique opportunity to increase the capabilities and interoperability of the US Navy in the region, while strengthening maritime ties with nations in the region.

The U.S. 5th Fleet area of operations encompasses nearly 2.5 million square miles of water area and includes the Arabian Gulf, Gulf of Oman, Red Sea, and parts of the Indian Ocean. The region is comprised of 20 countries and includes three critical choke points at the Strait of Hormuz, the Suez Canal, and the Strait of Bab-al-Mandeb at the southern tip of Yemen. Cooper is the exercise commander and commodores from Pakistan and the United Kingdom serves as the deputy commander and vice commander respectively.

International naval forces participating in IMX/CE 2022 are divided into four geographical combined task forces led by the United Arab Emirates, Egypt, Kenya, and Oman. Training will also focus on enhancing capabilities in command and control, sea control, maritime security operations, and mine countermeasures. A fifth combined task force called Task Force X was established for conducting portions of the exercise focused on unmanned systems and artificial intelligence integration. Israeli naval forces are participating in such a multinational event for the first time. Until now, Israel held joint exercises with US forces, but IMX 2022 provides the first opportunity for cooperation with regional navies. The Israeli units will include missile boats and divers.

The region has become an operational testbed for advanced technology, for its geography, climate, and strategic importance offer a unique environment for technology innovation. During a recent demonstration, LPD 27 USS Portland used an onboard Solid-State Laser – to destroy a surface target. Portland previously tested the LWSD in May 2020 when it successfully disabled a small unmanned aerial system while operating in the Pacific Ocean. The Office of Naval Research selected Portland to host the laser weapon technology in 2018. The LWSD is considered a next-generation follow-on to the Laser Weapon System (LaWS) that afloat forward staging base USS Ponce (AFSB(I)-15) tested for three years while operating in the Middle East.

IMX/CE 2022 is not only the largest multinational naval exercise in the Middle East but also the largest unmanned exercise in the world with more than 80 unmanned systems from ten nations. The exercise will allow participating forces to test unmanned systems and artificial intelligence in different training scenarios and ultimately apply the lessons learned to future real-world operations.

The lead USV operator in the region is the US Naval Task Force 59, established last year in Bahrain to help the US Navy expand its unmanned systems testing across domains. TF59 quickly evolved into working with regional partners – first with Bahrain, and then Jordan.

In October 2021 Taskforce 59 and Bahrain conducted at-sea evaluations of new Mantas T-12 and Devil Ray T-38 USVs and drones off the coast of Bahrain. Currently, the unit operates groups of Saildrone Explorer wind-powered USVs in the Red Sea and the Arabian (Persian) Gulf. “We’re really resetting benchmarks of what we thought was possible,” Cooper said. “The drones that we have operating out of Aqaba have been at sea for 33 straight days – really redefining what persistence means in the maritime environment.”
Tweet
Recommended Posts 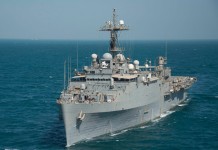 Stennis Carrier Group Departs on a Mission to the Persian Gulf 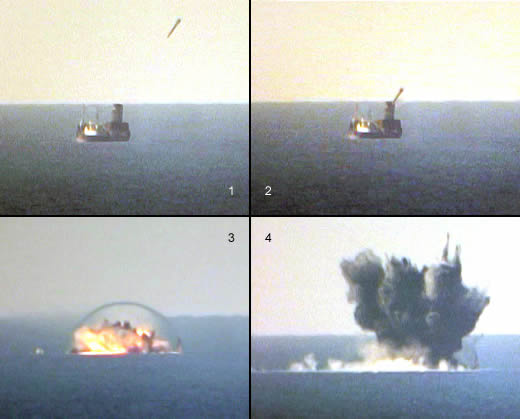 2011 Flashpoints: Asia – The Chinese Dragon Vs The Indian Tiger