Sig Sauer has won a 10-year contract with the U.S. Army with an initial delivery order worth $20.4 million and a ceiling value of $4.7 billion. Under this contract, the company will supply a family of weapons of up to 250,000 rifles and light machine guns. The XM5 Rifle will replace the M4/M4A1 carbine within the close combat force, and the XM250 Automatic Rifle will replace the M249 Squad Automatic Weapon (SAW). Having won the handgun contract in 2017, that makes Sig Sauer the premier supplier of small arms providers to the Army’s close combat and special operations forces. 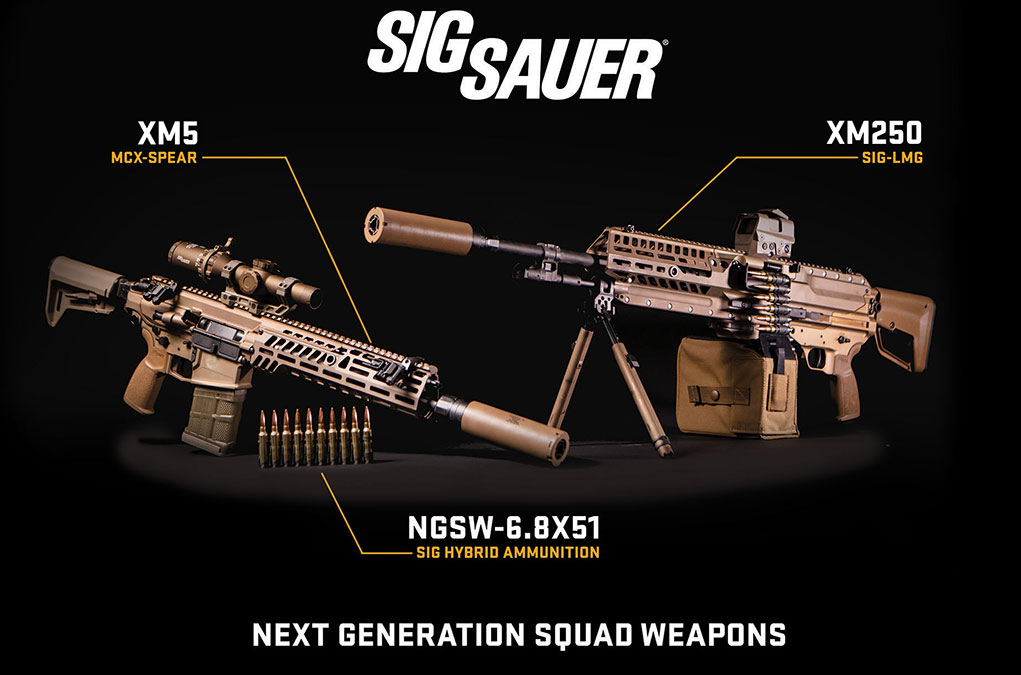 According to Col. Scott Madore, PM Soldier Lethality, PEO Soldier, the rifle was developed as an integrated system based on a projectile developed by the Army – “here is the 6.8 projectile, design me a system,” the Army asked industry.

The SIG-LMG lightweight belt-fed machine gun and SIG MCX-SPEAR Rifle are purpose-built to harness the energy of the SIG FURY 6.8 Common Cartridge Ammunition enabling greater range and increased lethality while reducing the soldier’s load on the battlefield.

The U.S. Army’s procurement of the NGSW System marks the beginning of an era where combat weapons are coupled with a suppressor as standard issue equipment. The SIG SLX Suppressors reduce harmful gas backflow, sound signature, and flash, and SIG SLX Suppressors feature a patented quick-detach design for easy installation and removal. While the new NGSW offers much-improved performance, this benefit comes with a weight penalty. Madore said that the XM5 weighs about two pounds more than the M4 it will replace, while the XM250 weighs about four pounds less than the M249.

Operational Testing of the new weapons is expected to occur in the third quarter of F.Y. ’23, followed by the first unit equipped with the M5/M250 by the fourth quarter of 2023. 120,000 weapons will be needed to equip the Army’s close combat force and special operations forces (107,000 M5 and 13,000 M250). The close combat component includes infantry, cavalry scouts, combat engineers, medics, and forward observers. The Marine Corps is also expected to receive quantities of the weapons for their close combat forces. Other units will continue to use the M4/M249 for the foreseeable future. As for exports, Australia and the U.K. are already interested in the new weapon, but other NATO armies have already invested in new weapons programs based on NATO-standard 5.56/7.62 mm and are not likely to follow the 6.8mm any time soon.

“This is the first time in our lifetime, the first time in 65 years, the Army will field a new weapon system of this nature, a rifle and automatic rifle, a fire control system, and a new caliber family of ammunition.” Army Brig. Gen. Larry Q. Burris, the Soldier Lethality Cross-Functional Team director, said. He noted that the next-generation combat weapons would give the Army’s close combat force the capabilities to fill the gaps identified in the small arms, ammunition, configurations study of 2017. “We are here to establish and maintain overmatch against near-peer adversaries. That is more urgent and relevant today than any time in recent history,” Burris said, adding the Army was able to do in 27 months what might otherwise have taken anywhere from eight to 10 years.

It’s expected that the first unit of soldiers involved in close-quarters combat will be equipped with the new system in the fourth quarter of 2023.

The 2017 SAAC study validated a standing requirement for increased energy at the target and identified the need to reduce shooter error through advanced fire control capabilities. The next-generation squad weapons program began in 2018 to meet that need, encounter, and defeat emerging protected and unprotected threats. The new weapon family is supported by a full suite of 6.8 mm ammunition for combat and training, an integral suppressor, and Fire Control optics.

Both weapons will feature the XM157 Fire Control optic, made under a contract won by Vortex Optics subsidiary Sheltered Wings in January. According to government documents, that contract will be worth $2.7 billion over the next ten years. The optical sight integrates several advanced technologies, including a variable magnification optic (1X8), backup etched reticle, laser rangefinder, ballistic calculator, atmospheric sensor suite, compass, Intra-Soldier Wireless, visible and infrared aiming lasers, and a digital display overlay.

The fielding of the weapon has to match the stockpiling of the new ammunition. Army Brig. Gen. William M. Boruff, the program executive officer in the Joint Program Executive Office, Armaments and Ammunition, said SIG Sauer would initially produce the new 6.8 mm ammunition. Still, by 2026 the Army plans to take over ammunition production at Lake City Army Ammunition Plant in Missouri. After that, SIG Sauer will become a second-source provider of the new ammunition. The new ammunition includes multiple types of tactical and training rounds, including general-purpose the blank, the drill dummy inert, and high-pressure cartridges that increase accuracy and are more lethal against emerging threats than the 5.56mm and 7.62mm ammunition. 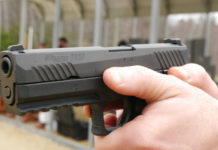