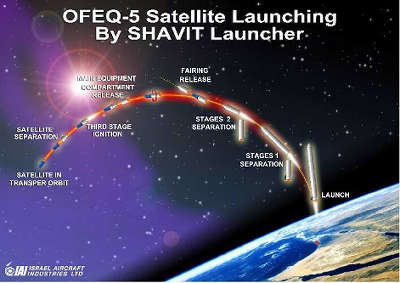 Utilizing an innovative concept for launch preparation, SHAVIT is relatively independent of the launch site and provides full testing of the launcher on the launch pad. This configuration enables satellite launch from different launch sites, according to customer requirements. Shavit is offered in two versions,

Photos: Ofeq 5 launched into space on May 28, 2002 at the IAF Palmachim missile test center, on the Israeli Mediterranean coast. The Shavit LK-A satellite launcher is believed to be a derivative of teh IAI MLM/IMI Jericho 2 missile (Pictures: IAI)