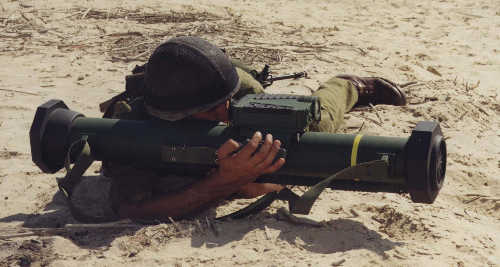 Shipon, anti-tank weapon is in development at the Rocket Systems Division (RSD) of IMI. Shipon is a new shoulder launched infantry weapon system based on an unguided rocket, capable of defeating tanks and fortified targets from a range of 600 meters. Two versions of Shipon ammunition are currently in development – the dual mode anti-tank/anti-fortification rocket uses a tandem shaped charge warhead designed to defeat advanced reactive armour and penetrate up to 800mm of armoured steel. The anti-fortification/anti-personnel rocket is designed to penetrate walls, and explode inside building for maximum effect. Other types of ammunition are considered for future development, including extended range rockets.

Shipon rocket utilizes the combat proven SMAW (B-300) propulsion system, RSD is currently evaluating the introduction of soft-launch propulsion, to enable operations from buildings and bunkers. Offered as a low-cost weapon, Shipon is designed to fill the gap between anti-tank rockets and expensive missiles. The development of the missile is in an advanced stage, and initial demonstrations are expected by 2003. A major development effort is focused on a unique fire control system which is attached to the disposable canister. The FCS is designed to implement a unique, real-time cross-wind measurement along the trajectory to the target. Other functions include range-finder, automatic compensation for launcher inclination, moving target engagement capability, automatic cross-hair repositioning and other advanced features, which contribute to achieving hit probability over 50% at a range of 600 meters. The fire control system takes less than one second to calculate and set the gunner’s aiming point to hit a target as far as 1000 meters away. Shipon system weight is 9 kg.