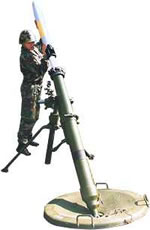 The guided bomb utilizes laser illumination to home in on the target. The system uses a mobile or dismounted (carried by a crew of two) and operated fire control system, that also supports target illumination, location and orientation of the firing position.


The projectile weighs 27kg, of which 11.2kg is the High Explosive Fragmentation warhead, containing 5.3 kg of HE. and has a warhead.