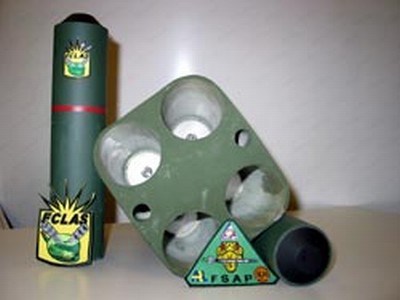 The FCLAS system, under development at the US Army Tank Automotive R&D and Engineering Center (TRADEC) is one of the candidates for the future FASP program. This system provides an autonomous, fast reacting countermeasure against incoming threats, such as RPGs, anti-tank missiles and HEAT ammunition (CE). The program development is supported by the US Special Operations Command and the US Department of Energy.

FCLAS can for the “close-in” element of a larger protection suit (FSAP for example) or as a stand-alone system. It is comprised of a sensor and short range grenade launcher, loaded with special fragmentation grenades with delay fuses set to intercept the incoming threat at a range of approx. 5 meters from the protected vehicle. The actual initiation of the explosive charge is triggered by a side looking RF proximity fuse which senses the incoming projectile as it passes nearby. The explosion forms a vertical, doughnut shaped fragmentation effect that kills the passing threat but does not effect the protected vehicle. The system’s target weight is 140 kg., to enable deployment on light vehicles. Each grenade is equipped with a forward looking radar mounted on the exposed tip of the grenade. Each of the FCLAS munitions has such an integrated radar, which forms a complete sensor, monitoring a protective hemisphere around and above the vehicle. The Army hopes to get a prototype system of FCLAS for testing in 2004 and an operational system, which could protect against RPG threats, deployed with Bradley, Stryker Humvee and military trucks (FMTV) – by 2005.

The system can be used to protect armored and unarmored vehicles, as well as naval vessels and even helicopters. Other utilization options include protection of fixed locations, including military posts, buildings and even soft targets such as tents or highly vulnerable objects such as oil and gas tanks etc. FCLAS was awarded among the US Army Material Comamnd’s “10 greatest inventions for 2002”.