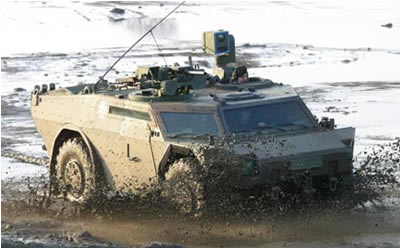 FENNEK is an air-portable armored scout vehicle, developed and produced by a consortium including the German company Krauss-Maffai Wegman and the Dutch SP aerospace & vehicle systems. Both countries are procuring 612 vehicles. Deliveries started during the summer of 2003.
Fennek has a three-man crew, consisting of commander, observer and driver. Its armor protection defeats all handheld weapons as well as AT and AP mines. With a total weight of approximately 11 tons, the vehicle is capable of carrying a payload of 3 tons. The vehicle is equipped with an integral sensor payload and a remotely controlled weapon station, mounting a 7.62 cal. machine gun or a 40 mm grenade launcher.