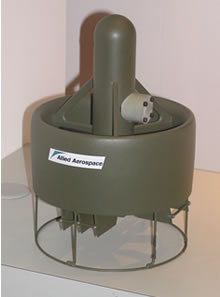 Allied Aerospace developed the iSTAR family of high speed, vertical takeoff and landing (VTOL) UAVs utilizing Lift Augmented Ducted Fan (LADF) system in response for the US Army Organic Aerial Vehicle (OAV) program. The design concept is simple and efficient and makes use of lightweight composite construction techniques. The structure is comprised of an outer duct enclosing the fan system, centerbody containing the avionics and engine, fixed stators and movable vanes operated by actuators, performing thrust vectoring. The engine is housed in the centerbody, and fuel tanks are located in the forward section of the duct. A variety of payloads may be carried in the nose, tail or duct of the vehicle.

Unlike other VTOL UAV’s, the iSTAR utilizes the airfoil-shaped duct to provide augmented lift during low and high-speed cruise. Vehicle control is provided by thrust vectoring resulting in a highly stable and controllable vehicle during all phases of flight. The company is currently developing a 23 cm diameter back-packable Advanced Concept Technology demonstrator (ACTD) the iSTAR UAV, under a DARPA contract, developed under the MAV and OAV programs. The small UAV will be able to carry EO payloads, TV, infrared and acoustics sensors. The US Army is also considering deploying the UAV from autonomous Unmanned Ground Vehicles (UGV).