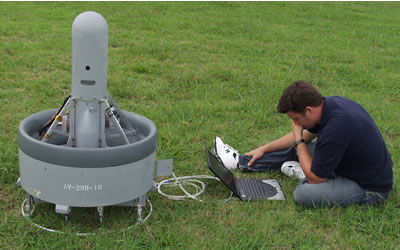 The Future Combat System (FCS) Unmanned Air Vehicle (UAV) plan consists of a family of several types of airborne vehicles, including the Organic Air Vehicle (OAV). The OAV will be designed to operate from the battlefield, by the field troops, and provide small combat teams and individual soldiers with the capability to detect the enemy forces concealed in forests or hills, around buildings in urban areas, or in places where the shooter does not have a direct line-of-sight. OAVs can perch and stare, and essentially become sentinels for maneuvering troops. Rather than sending a soldier into harm’s way to scout a particularly potential high-risk area, the unit will be able to use the OAV instead. Typical OAV missions include reconnaissance and surveillance, path finding for friendly ground vehicles (both robotics and manned), maneuver force protection, and targeting for non-line-of-sight fire operations.

The OAV is designed for the platoon level of the Unit of Action (UA) of the FCS equipped combat formation. The OAV is excepted to weigh +35 kg and have mission endurance of 25 minutes. It will dash at speeds of 80 km/h and higher, up to a range of up to 2,000 m, The platform will carry payloads of 3 – 3.5kg comprising of EO, IR, SIGINT, acoustic, mine detectors and communications relays. It will operate from a vehicle platform, either a Hummer or autonomous (robotic) transporter launcher. An example of the OAV is the iSTAR system.

OAVs are currently under development in two groups – a larger, Class II version and a backpackable Class I version. Three teams were awarded development contracts for Class II OAVs: GoldenEye industry team, led by Aurora Flight Sciences, also includes Northrop Grumman and General Dynamics Robotic Systems. The Honeywell led team, with team members AAI, AVID and Techsburg Inc. The third team is led by BAE Systems. The program will develop a Class-II UAV prototype for the Army’s Future Combat Systems (FCS). Combined, the three phases of the program have the potential to last 48 months and have a total program value in excess of $30 million. During the initial phase, the teams will develop a preliminary design for the OAV-II system and demonstrate the critical elements of the collision avoidance subsystem. A Phase II award decision is expected during the summer of 2005, shortly after the completion of Phase I.

The OAV II will be fully integrated with manned and unmanned ground combat vehicles as a net-centric battlefield assets. The GoldenEye proposed system consists of the VTOL unmanned platform, that uses thrust vectoring and torsionally disconnected wings that was originally developed for an earlier DARPA program. GoldenEye will maintain range and endurance to cover the entire forward edge of battle area, and will feature advanced collision avoidance capability that will allow it to operate in dense urban areas. The aircraft will have the capability to detect targets with visual or infrared sensors and laser designate the targets. In spite of these robust capabilities, GoldenEye will not require runways or helipads to operate. Its small logistical footprint will enable it to move with the FCS small combat unit. The Honeywell version for the OAV-II is based on the 29-inch-diameter iSTAR ducted fan vehicle developed for DARPA. The UAV is controlled with Honeywell’s micro-electric mechanical systems (MEMS) technology. The vehicle is equipped with forward and downward looking video cameras that relay information to a remote ground station video terminal. Variants of these air vehicles also can be equipped with a variety of sensors, including those for biological hazard and mine detection. No details are available at present on the BAE proposal.

A smaller version of the OAV is the class-I vehicle, considered to be soldier transportable system, able to take off and land vertically or from a very short strip. Man portable OAV-I versions are under development by the GoldenEye and Honeywell teams to provide “hover and stare” battlefield surveillance and forward scout missions. These vehicles should weigh up to 10 Kg, including 0.5 kg payload. Powered by a diesel fuel engine, it will be required to perform relatively short missions, of up to 15 minutes with a range of 1,000 meters. Operational ceiling will be 2,400m’ above sea level. The system should have a low acoustic signature of less than 75 db from a distance of 7 m’. 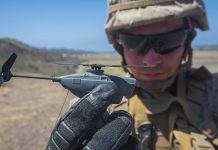