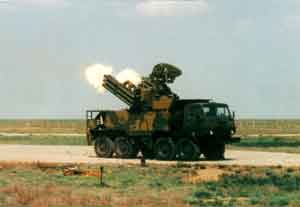 Pantsir S1 was developed by KBP, as an upgrade of the Tungushka, offering extended engagement capability such as the use of both gun and missile on the move (Tungushka can use only gun), on the tracked system. The system also offers faster reaction time of 4 – 6 seconds (compared to 8 seconds for the Tungushka and 5 – 7 for Pantsir S1O). Like its predecessor, Pantsir S1 can also engage two separate targets simultaneously.

The Pantsir is offered in a tracked, wheeled versions, installed on APCs such as BTR-80and trucks, such as the 8×8 Ural 5323 truck. The truck mounted version is loaded with 700 cartridges per barrel and twelve 57E6-E missiles (also known as 9M335 or the 9M311).

The missile offers high kill probability (0.7 – 0.95) in an expanded envelope with extended range of 1.2 km to 20km, (1.5 – 18 km in Pantsir S1O version) and altitude of 5 m’ to 10 km. The guns are designed for operation at a range of 200 m’ to 4 km and altitude of 0 to 3,000m’. These missiles use a longer tandem boost motor to reach an altitude of 12,000 m’. The range of the radar was also extended to 30km, with simultaneously tracking of up to 20 targets, and engaging two separated targets at the same time. The launch customer of the Pantsir S1 was the UAE.