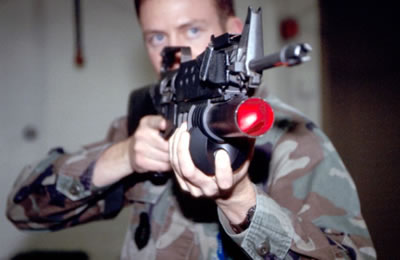 Saber 203 laser illuminator temporarily impairs an adversary’s ability to fire a weapon. The laser has an effective range of 300 meters. The operational system uses a semiconductor laser which loads into a modified M-203 40mm grenade launcher. The laser is loaded into the launcher like an actual grenade and is operated by a switch installed below the launcher. In emergency, the capsule can be ejected and replaced with a grenade. The eye-safe laser briefly illuminates an opponent with harmless, low power laser light. On night operations it can be used to degrade human night vision capability and electronic night vision devices. Realizing he has been targeted, the aggressor hides or flees rather than risk death by aiming his weapon and attracting defensive fire.