Advanced mortar bombs are under advanced development stage for the US Army. XM984 Extended Range Mortar Cartridge (ERMC) is currently under development for by Talley Defense Systems for the US Army 120 mm M120/M121 mortar system. A conventional M934 bomb fired from this system will reach a maximum range of 7,200 metres. The XM984 is expected to almost double the range, to reach 12,000 m’. The range extension being produced by a nose-mounted rocket motor that cuts in at a pre-determined point during the bomb’s trajectory. The rocket will fire 12 seconds after the launch, and burn for a period of four seconds. After a predestinated delay, 54 M80 grenades will be released from the bomb, effecting a target are 233 percent larger than an HE bomb.

A different munition is the M395 Precision Guided Mortar Munition (PGMM) under development at Lockheed Martin and Diehl of Germany as well as ATK, which recently won a US Army development contract for the weapon. Lockheed Martin’s PGMM  is based on Diehl’s Bussard artillery projectile, will provide the tactical commander with ‘surgical’ strike capability, to destroy high value / high risk targets. Using such munitions could increase the future effective range from 0.5 up to 15km. PGMM will not use rocket assistance for range enhancement, but utilize aerodynamic surfaces for the mid-course gliding. On the terminal phase, a semi-active laser homing seeker acquires the target and guide the munition to impact. Initial productions of the PGMM will be equipped with semi-active laser seekers, and be capable of a range of 7.5 km. Follow-on systems will have optional thermal imager, and extended range capability, as well as more choices for fuzes and warheads. The IR seeker will detect and classify targets, process the information automatically into navigation (GPS), guidance and control subsystems to ensure first-hit-on-target. A self-destruct mechanism eliminates the collateral damage from duds, for advancing troops. The initial phase of the program was completed in 2001 with successful live fire demonstration. Advanced development was started in 2002. 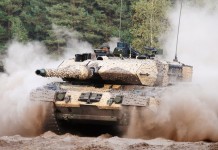