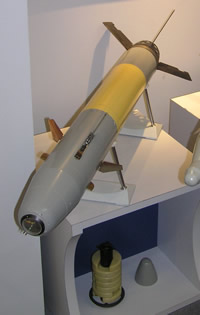 Some impressive technological gains have enhanced accuracy, lethality and combat safety for the modern mortar systems.

Projectile guidance technology has already been used since 1994 in 120 mm mortars, with the IR homing Bofors/Saab Strix (picture below left) and the Eastern Block 120 mm Gran (picture at right) mortar rounds. Strix produced by SAAB/Bofors, can engage targets at a range of 7 km, operates in an autonomous heat-seeking mode which can intelligibly recognize targets and discriminate targets among decoys and burning targets. Strix has been in service with the Swedish Army since 1994 and also has been ordered by the Swiss Army. It is optimized as an anti-armor weapon, defeating targets with top-attack.

Cargo munitions are introducing an innovative new advantage for mortars. One of the munitions promoted for use by the  AMOS mobile mortar system is a 120 mm cargo munition jointly developed by the Swiss company RUAG and Israel Military Industries (IMI). The M971 mortar bomb carries 32 x M87 dual purpose (anti-personnel/anti-material/armor) submunitions. Each bomblet has can penetrate up to 105mm of steel and releases 1200 preformatted fragments. According to IMI a single cargo round covers a lethality area of 100×100 meters. The bomblets are equipped with dual-action self destruct fuses to minimize hazardous duds. Another cargo bomb is produced By Instalaza of Spain. Mat-120 is equipped with 21 submunitions, each with an electronic impact fuze that also has self-destruct function.

A “semi-smart” mortar munition is under development at Soltam Defense for 120mm tubes. Designated M150/M151 HE-TAG  “Mor“, the new design implements laser homing technique for improving the accuracy of the mortar fire against “time-urgent” area targets, rather than hitting point targets at pinpoint accuracy. The idea is to fire a single mortar round on target to neutralize it, thus saving the costly ammunition spent in traditional ranging process. A homing device is fitted to the tip of the bomb, which scans the ground during its terminal trajectory phase searching for the designated target area. Once the laser spot has been acquired, moving tail fins are deployed to correct the bomb’s trajectory to impact on the spot. The M150 has a range of 7,2km, the M151 fired from a longer barrel reaches 9,5km.