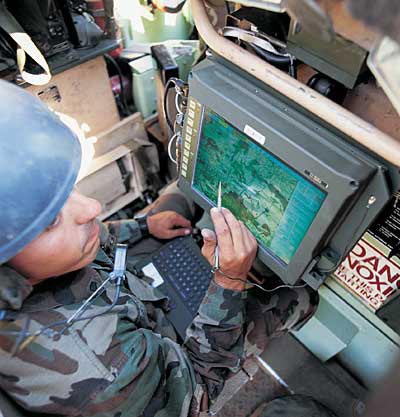 FBCB2 is designed to support commanders at lower echelons with real-time situational awareness, target identification and graphical combat area displays. The system’s situational awareness component displays the geographical location of all weapons, platforms, soldiers, command posts and other facilities based on actual locations reported automatically by the system’s subscribers in near-real time. The system is used in conjunction with the Army’s Tactical Internet (TI) seamless Internet and legacy Army Tactical Command and Controls System (ATTCS) to link to the Army Battle Command Systems (ABCS). Operating at division level and above, ABCS collects information from both the operation center and the individual units, processes a common operational picture (COP) and disseminates it through FBCB2 computers to all levels of command, thus improved situational awareness, coordination and combined operations and support.

FBCB2 subscribers automatically post their position and status messages, via wireless or satellite radios, to nearby subscribers as well as to central hubs at the brigade’s Command Post. The information is transmitted over wireless and secured internet, which enables every member of the network receiving relevant information on nearby friendly forces, and creates common, constantly updated digital maps of the battlespace, shared by all the combat echelons below or above the brigade, as well as nearby forces or joint forces. This common picture displays positions and details about enemy forces, and specific targets, friendly and own forces, logistics information etc. FBCB2 is designed to operate with current systems, and is fully functional with relatively slow wireless data modems and narrowband links. To support such operation the system relies on a number of common messages, and the delivery of textual messages.

DRS started the delivery of FBCB2 hardware under low rate production of 9,000 sets in 2001. By June 2004 the program moved into full rate production under a five year $100 million US Army contract. DRS received the latest $45.5 milliom order in October 2005, for the supply of more than 5,500 sets to be delivered through 2006. Systems are installed on M1A2 Abrams Main Battle Tanks and M2A3 Bradley Fighting Vehicles, to support the Army’s Blue Force Tracking requirements, which include beyond line-of-sight reporting and tracking, as well as significant improvements in vertical and horizontal information integration for incorporation into the Army’s overall battlefield visualization efforts.