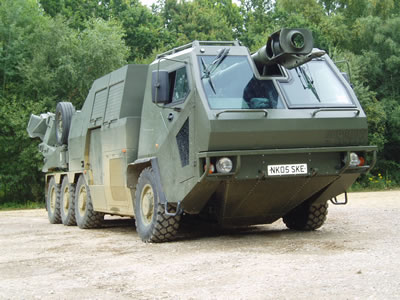 Portee is comprised of a 155mm/39 calibre M777 towed lightweight artillery system and a purpose-built portee 8×6 version of the Supacat high mobility cross country vehicle. The gun is carried on the rear of the vehicle. The Supacat’s High Mobile Truck (HMT) family is entering service with US and British forces in a two and three axels configurations.

M777 is already in low rate initial production for the US Marine Corps. With additional orders from the US Army and National Guards the total US bound production of M777 is expected to top 600 guns.

In the traveling mode the M777 is carried in the rear part of the chassis, while the ammunition is stowed at the front, between the armored, NBC protected split cab. On reaching the combat area the howitzer is quickly dismounted an onboard mechanical handling system, allowing it to be towed rapidly into and out of action and up to 3 ammunition containers can be carried in its place allowing a total of over 70 readily available rounds.

Equipped with a fully integrated digital fire control system the M777 howitzer can be brought into action in less than one minute, and moved to an alternative firing position in less than three minutes. Portee was privately developed at BAE Systems in an anticipation of future British Army requirements for up to 45 Lightweight Mobile Artillery Weapon System – Gun (LIMAWS (Gun). In a series of tests, Portee fired over 350 rounds demonstrating its flexibility as a medium weight, highly mobile artillery system. The main advantage of Portee is the fact that the unit can be split into two loads slung under a transport helicopter. The complete M777 Portee System weighs about 12.3 tons and can be carried inside a C-130 Hercules transport aircraft. The British Army evaluates other alternatives, including Giat Industries CAESAR 155mm/52 calibre system based on a 6×6 truck chassis, and the standard 155mm M777 lightweight artillery system.