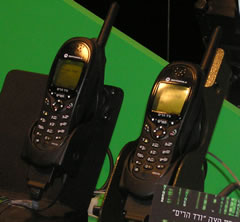 Based on networks already deployed worldwide with Security and Public Safety services , Motorola has expanded its offerings to military cellular \wide area communications, based on its Tetra IP network. The ETSI, standards based platform is modified to suite the specific requirements of the client provide a full communications suite for logistic and support units, it can be configured to cover a specific area, support mobile operations at extended range, connect between several dispersed locations over satellite link or provide nation-wide cellular coverage, in support of military operations in peacetime or at war.

The first military implementation of the TetraIP was the creation of a new, terrestrial nationwide military cellular network for the Israel Defense Forces providing dependable, deployable voice and data services to military commanders. Code name Vered Harim (Moutain Rose), the system became operational in mid 2004, after almost four years of development and installation. This network will become part of the IDF future “Digital Army Program”. Vered Harim revolutionizes the IDF communications networks, transforming from hierarchical networking model to spatial connectivity infrastructure. The system replaced outdated means of communications, including terrestrial communications, wireless radio-telephone (RT) links and some combat net radio networks. For the first time Israeli commanders can utilize highly secure communications on the move, anywhere they operate. The system also support data transfer. Currently transfer of images and messages is facilitated with planned enhancements including video services. Data support of up to 28.8 kbps is currently available to support forces deployed throughout the theater of operation. This bandwidth is sufficient to transfer live video, utilizing compressed  video transfer services provided by Visual Defense (Emblaze) systems. These networks can link to terrestrial networks or satellite communications systems, to facilitate direct and seamless connectivity from the lowest echelon up to the national command level.

As a cellular communications infrastructure, the network maintains all technical elements at the infrastructure level. This military network is maintained by the operator and therefore, enables services which have so-far been maintained only by commercial providers. These include end-to-end high level of security, assured coverage and capacity, based on operational planning (not only by actual demand) and the ability to “kill” a unit which is interfering, lost or captured by the enemy.

Unlike other commercial cellular networks which rely mainly on fixed sites, Motorola’s solution uses fixed and transportable sites, which deploy with the military units, positioned at vantage points where they provide optimal coverage and redundancy to maintain effective connectivity and communications capacity for the operating forces. Since the system is not dependent in the commercial infrastructure, communications can be sustained even under critical loads and in emergencies, where other forms of communications fail. When communications is not available for any reason, each subscriber unit (handset) is configured to communicate directly with nearby handsets therefore maintaining a minimum level of communications.

Handsets are provided with a SIM card and personal unique ID for duplex communications at a high level of security. Handsets are also integrated into robust vehicular mounts, including militarized mounts for AFV installations.