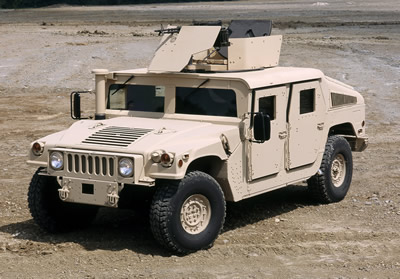 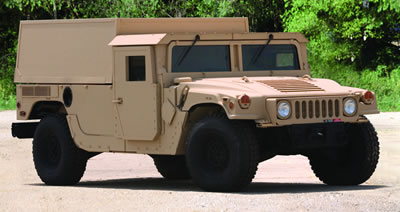 The Humvee popularity continues despite the vulnerability of the basic vehicle, as demonstrated in recent conflicts. Therefore, armoring solutions to better protect the vehicle and crew are proposed by many companies. The original vehicle manufacturer AM General is offering an improved, heavier versions capable of taking increased payload capacity, with stronger engine, suspension and factory assembled armoring. The armor can be removed when the vehicle is not used in combat situations (saving fuel, maintenance and transportation costs). The new versions are M1151P1 armored troop carrier and M1152P1 armored utility truck. Both are based on the Humvee Expanded Capacity Vehicle (ECV) chassis and equipped with the Optimizer 6500 V8 6.5 liter turbocharged diesel engine, offering 36% increase in power and 69% increase in torque, over previous diesels used in the Humvee. Developing 190HP at 3,400 RPM and 308 lbs (515Nm) torque at 1,700 RPM, the new engine designed as a “drop-in” replacement for the original Detroit Diesel engine used in older Humvees. The vehicle is equipped with an automatic, electrically controlled 4 speed transmission. The ECV uses reinforced front body mounts and heavy duty variable rate rear springs to withstand the additional loads of the armor.

The new versions almost doubled the payload from 1,043kg (2,300lbs) available for the up-armored M1114 to 1,904kg (4,200lbs) of the M-1151P1 which has a maximum gross weight of 5,487kg (12,100 lbs.) The M1151P1 is fitted with an armored hull, underbody armor and energy absorbing seats for the driver and crew. It also has rocker armor, protected roof and bullet proof transparent windscreen. As sufficient power is now available, a dual air-conditioning system has been provided for greater crew comfort. The M1152P1 uses similar features, plus an armor protected cabin, cargo and troop enclosures. This vehicle is optimized for use as an armored utility truck, designed for communications, C3 and combat service support functions. The first lot of 500 M1151P1 vehicles was shipped to US Forces in Southwest Asia in March 2006. Further deliveries will gradually replace aging M1052 and M1097 Humvees which are in service since the early 1980s.