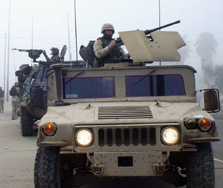 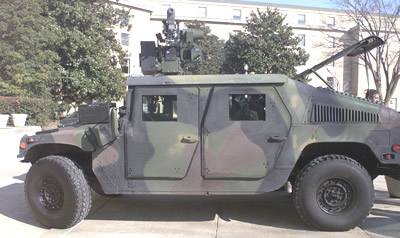 As the most popular tactical vehicle today, the M998 HUMMWV (dubbed Humvee) is currently used with many armies. However, only few except for the Israelis and US Army and US Special Forces are operating protected Humners. The M998 High Mobility Multipurpose Wheeled Vehicle (HMMWV, pronounced “Humvee”, also dubbed “Hummer“) is the most commonly deployed tactical vehicle used by the Armed forces of the USA and its allies. The original vehicle offers excellent road and cross-country mobility. It was designed in a variety of configurations; primarily for utility, logistical and scout missions. Where active combat role was considered, the Humvee was selected for its excellent cross country and road, air and helicopter mobility and load capacity. It was never intended to perform as armored combat vehicles. Such specification precluded armor protection, in order to maintain its low empty weight and thus high mobility standard. 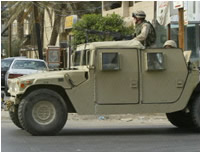 During and after the Kosovo conflict, the US Army decided to protect a small part of its Humvee fleet. The armored version would be heavier – resulting in reduced deployment flexibility. The US Marine Corps, requiring operational speed for its forces, opted not to protect its Humvees. Thus, in Iraq, they are currently forced to use some up-armored vehicles loaned from the US Army. The design of the up-armored M1114 Humvee matured around a standard protection kit adding about 2,000 pounds weight to the standard Humvee. The first up-armored version came off the production line in 1996. In addition to steel plating and ballistic-resistant windows around the cab of the vehicle offering improved protection against small arms fire and shrapnel, the steel plating underneath is design to survive up to eight pounds of explosive beneath the engine to four pounds in the cargo area.

Unlike the US army that considering the vehicle mainly for utility and cross-country transportation, the Israeli Army planned more tactical roles for the Humvee, which required higher level of protection. The heavier armor protection required further automotive and structural modifications stretching these M-1113 ECV designated vehicles to their limits. However, during the Lebanon conflict and fighting urban guerilla warfare in the occupied territories, the up-armored IDF Humvees, demonstrated their capability to withstand most types of attacks successfully.

During the security and stability operations that followed operations Enduring Freedom (Afghanistan) and Iraqi Freedom (OIF), a limited number of up-armored Hummers were available in theater, but as of May 2004, most vehicles remain unprotected. As a result, many Hummers are often falling prey to repeated attacks that causing heavy casualties to coalition forces. Soldiers traveling in these soft skinned vehicles become highly vulnerable to every type of attack, even stone throwing and fire bombs. Highest lethality attacks are by small-arms fire, grenades, mines and RPGs. 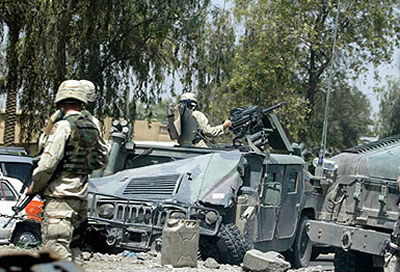 Among the most dangerous are the IED ambush and roadside bombs. In autumn 2003, responding to urgent calls from the field, requesting armor suits for the soft vehicles, the US Army launched a crash program to protect many of Humvees. The program proceeded in two parallel directions – accelerated delivery of highly protected up-armored vehicle, and implementation of improvised near-term solutions adding some protection levels to the crews. Makeshift armoring of vehicles, and ad-hoc in-the-field solutions became temporary measures by the forces in situ.

On May 2004 the US Senate approved US$618 million funding for the production of 300 M1114s per month from May through October, and 450 per month, from October 2004 till March 2006. $610 million were also allocated for armor kits for existing tactical vehicles. According to Major General John Sattler, Director of Operations for CENTCOM, the US Army initial assessments were that

1,000 up-armored Humvees will be sufficient for patrol, convoy protection and transportation in Iraq and Afghanistan. However, as opposition forces in both countries changed their ambush tactics and IED techniques, the numbers where updated, calling up for 2,500 more M-1114 up-armored Humvees. Currently, production of 2,000 more vehicles are on contract, and expected to be delivered in theater by December 2004, with approximately 4,500 up-armored humvees scheduled to be operational in the theater. In addition, 8,000 up-armored kits are on ordered and being installed to protect windshields and doors for additional vehicles, including trucked and soft skinned Humvees. In September 2006 Armor Holdings announced it will provide the US Army M1114 Up-Armored HMMWV with supplemental armor components to increase the vehicle’s IED protection levels. According to company sources, the contract worth is $183 million. The armor components will be delivered in 2007. As of May 2004, the US Army currently operates several versions of up-armored Humvees – the production model fitted to new vehicles, field modified vehicles, up-armored with the Armor Survivability Kit (ASK)developed by the US Army to improve the protection for Soldiers traveling with standard Humvee. Six Army depots are producing ASK, are scheduled to ship up to 5,000 kits by the end of 2004. In parallel, production of new up-armored Humvees is accelerated. In April 2004, a $110 million contract was awarded to O’Gara, (now called Centigon) for the supply of up-armored Humvees. By July 2004 the company is planning to increase production rate to 300 vehicles per month, up from the current 220. Another contract worth $30 million was awarded to ArmorWorks, for additional armoring kits for Humvees. By December 2004 the company delivered 1,000 Humvee Armor Kits to the US Army. Many of the remaining vehicles are fitted with steel plates and sandbags, improvised in theater. Battelle has also developed a lightweight armor kit for HMMVWs, The kit weighs around 750 pounds, (about a third of the weight of standard Humvee’s armor). By September 2004, 75 initial kits were delivered to special operations units and 400 more are on order.

The latest addition to the HMMWV is the fragmentation (FRAG) protection kit #5. The kit provides added protection to the vehicle by replacing the doors and much of the side armor. The actual kit weighs about 2,200 lbs., but the overall vehicle weight is only increased by 760 lbs. Current production Humvees are sent fully armored from the factory. FRAG 5 kits are sent to the field where install teams remove the existing doors and side armor and replace them with the new kit.