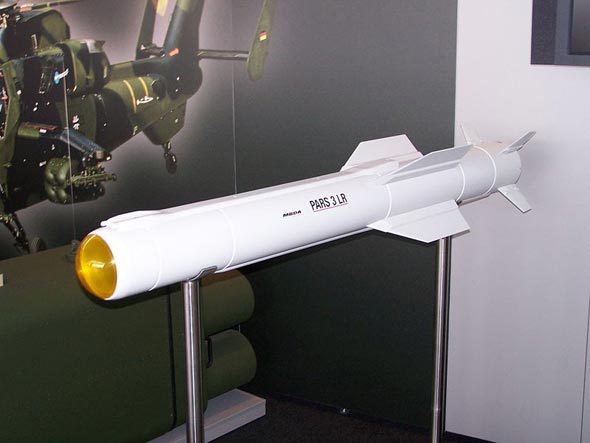 The German Army selected the PARS 3 anti-tank missile to equip its Tiger helicopters and is awaiting Parliamentary approval for its plans to buy 680 missiles. The missile is a “fire and forget” weapon, capable of engaging heavy armor at ranges of 5,000 – 6,000 meters. It uses a tandem warhead to penetrate the most advanced armor, including ERA. Each Tiger will be equipped with two containers carrying four missiles each. By utilizing “fire and forget” techniques, the gunner acquires the target when the helicopter is covered in defilade position, exposing only the mast mounted sight. The target’s image is transferred to the missile’s infrared seeker which locks on the designated image and holds it in position throughout the flight. Both the sight and the missile’s seeker use IR detectors operating in the 10 micron range to eliminate false identification or target ambiguity between the two sensors.

On June 30, 2006, the Federal Office of Defence Technology and Procurement (BWB) signed a 380 million euros contract for the procurement 680 PARS 3 LR missiles. PARSYS, a joint venture between LFK-Lenkflugkorpersysteme GmbH (50%) and Diehl BGT Defence (50%) will be responsible for industrialization and series production of the new missiles which will be delivered through year 2014.

Development of the PARS 3 LR was formally completed in mid-2004. However, since the series production contract for the TIGER helicopter, of which 80 helicopters are destined for the Bundeswehr, was signed back in 1998, LFK GmbH has been manufacturing the components of the PARS 3 LR system to be installed in or on the helicopter – such as launchers, electronics, etc. and Eurocopter has been integrating these into the platform.