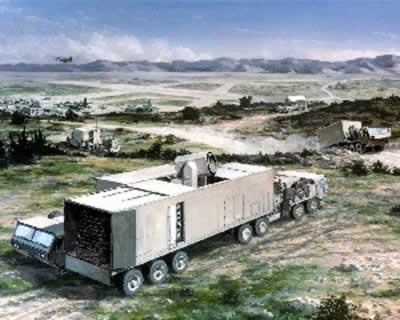 MTHEL uses directed energy (laser beam) to intercept aerial targets such as rockets, missiles, artillery shells and other aerial threats. The target destruction is achieved by projecting a highly focused, high-power laser beam, delivered by a chemical laser, with enough energy to affect the target, and explode it in midair. This operational concept is offering the first “reusable” interception element. Existing interceptors use kinetic energy kill vehicles (such as fragmentation warheads), which are not reusable.

MTHEL represents a transformational weapon system – the first mobile directed energy weapon that will be able to destroy tactical airborne threats in midair. In order to achieve a high rate of fire, designers are looking into the use of high energy capsules, which can be loaded prior to each shot. The cost per shot, primarily cost of the chemicals used to fuel the laser, is expected to be in the thousands of dollars – far less expensive than the cost of kinetic energy defense systems.

MTHEL is a development of the mobile version of the Tactical High Energy Laser (THEL) testbed weapon, developed by Northrop Grumman under a US Army contract. The program was expected to provide a completed prototype by 2007. By January 2006 the THEL/Nautilus program was shelved due to lack of budget. However, In July 2006, Northrop Grumman unveiled the Skygoard laser based C-RAM/air defense system, designed to protect civilian and deployed military forces.

Since the year 2000, THEL intercepted five artillery projectiles and 28 rocket targets, including the short range 122mm Katyusha type rockets fired singly and in salvos and larger, long range 160mm rockets which has twice the range of the standard katyusha. Most recently, on August 24, 2004 the system intercepted and destroyed mortar bombs, fired both single and in salvos. During the most recent test conducted on May 2004, THEL destroyed a large caliber rocket target, containing a live warhead, which was intercepted by the laser weapon. However, in late 2004 funding for the program was stopped claiming it was too bulky for army deployments. Northrop Grumman continued with development of a “relocateable” version of THEL to provide some defensive capability as part of Rocket, Artillery and Mortar Defense (RAM-D). The system’s radar is already operational in Israel, providing early warning from Palestinian attacks on the the city of Shderot.

The purpose of the planned MTHEL program was to develop and test the first mobile Directed Energy weapon system capable of detecting, tracking, engaging, and defeating Rockets/Artillery/Mortars (RAM), cruise missiles, short-range ballistic missiles, and unmanned aerial vehicles. MTHEL would have been the first tactical and mobile, directed-energy weapon capable of shooting down in flight airborne targets such as rockets, cruise missiles and other weapons, protecting expeditionary forces or deployed forces as well as civilians areas targeted by such threats. The alternative “relocatable” system will be optimized to protect critical and sensitive military sites at forward area deployments. It could also provide limited area protection for population centers threatened from attack by RAM – as evident in Israel and Iraq.

THEL/ACTD program was developed for US Space & Missile Defense Command and the Israel MOD demonstration tests by TRW, now part of Northrop Grumman corp. Subcontractors for the program include Ball Aerospace and Ball Aerospace in the US and the Israeli companies: Elbit/El-Op, IAI/Elta which built the radar and fire control system, RAFAEL and Tadiran.