The IDF selected the British Land-Rover Defender, up-armored by the Arotech subsidiary MDT for a replacement of the Israeli based Automotive Industries Storm (Sufa) vehicles. Responding to the growing threats by small-arms and IEDs, the IDF modified the Storm (AIL M-240) with extensive armoring. With a large loading bed, and a narrow body, enabling the vehicle to move in dense urban area, the Storm is offered with a 180 HP gasoline engine or 107 HP diesel engines, coupled with a manual transmission. With a gross weight of up to 2,350 kg, the Storm can carry up to 750 kg of payload, including five or seven passengers. Storm could handle well the additional weight of add-on armor required to stop low threats, but it does not have the payload capacity to carry heavier armor or combat loads. The IDF is currently buying the new Storm II but no armored versions have been released yet.

The current configuration fitted, with an armor hull, bullet-proof windscreen, protected roof and more, provides a good protection converts this lightweight patrol, utility and command vehicle into a maximum weight up-armored vehicle. The modifications added significantly to the gross weight of the vehicle, causing safety hazards, limiting mobility and maneuverability, limiting its operability in combat operations, causing rapid wear and frequent breakdown of automotive systems and assemblies. The IDF is looking for Storm replacement for some time, and has recently announced an initial order for David armored vehicles, under a $22 procurement order to replace its veteran urban warfare workhorse. In August 2006 MDT received a follow-on order of US$10 million to supply more vehicles through July 2007. 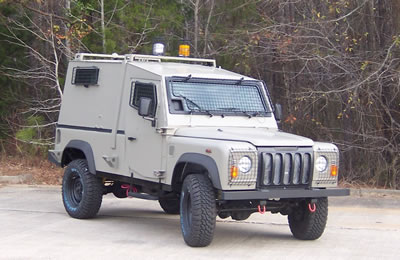 Promising to be a more flexible ‘Urban Combat Vehicle’, “David” uses a larger chassis based on the LandRover Defender, designed in Israel by Arotech’s MDT Protective Industries in collaboration with the IDF. The ‘David’ will be built in MDT Armor’s Alabama facility. With a small footprint, considerably shorter, lighter and narrower than the up-armored HMMWV, the 3.7 ton armored defender is well suited for operating in urban and other densely populated areas. The vehicle offers full 360 deg. Protection against assault rifles at point blank velocities, limited protection against IEDs, roof protection designed to defeat typical threats fired at very short range and augmented floor protection. The vehicle is fitted with run-flat inserts to maintain mobility even with deflated or damaged tires. The 2.5 liter turbocharged diesel engine develops maximum power of 122 bhp, coupled via manual 5 gear transmission to the 4×4 propulsion system. MDT followed a modular design allowing for several armor options, seating arrangements and equipment installations carrying 4, 5 or 6 soldiers in full battle gear. Gun ports in all 4 directions allow for accurate return fire as soldiers have full view of gun sites and surrounding area through the armored windows.