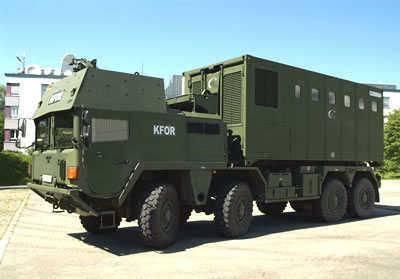 EADS will supply two protected personal transport to the Danish Army. The TransProtec containers were specially developed for the safe transport of people in crisis areas. TransProtec was developed by EADS, in cooperation with the German Federal Office of Defence Technology and Procurement (BWB) and Krauss-Maffei Wegmann. The new protection system offers optimal protection against attacks with improvised explosive devices (IED), sniper fire, shrapnel, mines and ABC attacks. The protected container can accommodate up to 18 persons including equipment. In future, a modified version of TransProtec will be capable of transporting a larger number of casualties and nursing staff together with the necessary facilities. The hook loading system makes it possible to quickly load and unload the transport vehicle, which has a protected driver’s cab. The German Army was the first service to use the system, under the name “MuConPers” (Multifähiger Container für die Personenbeförderung – multi-capable container for transporting individuals). These containers were first deployed with the German Armed Forces in the Balkans. The containers ordered by the Danish Army have the same configuration as the containers. According to Bernhard Gerwert, Head of EADS Defence Electronics. the system was developed to provide safe logistical transportation of people and supplies, which that always involve exposure to certain dangers. “We developed and built the protective containers in order to counteract this potential danger and to ensure the best possible protection for soldiers and civilians being transported“, says Gerwet, “The level of protection and comfort during transportation is much higher than with the vehicles already used for this purpose, in particular with regard to protection against mines and attacks with explosives.” 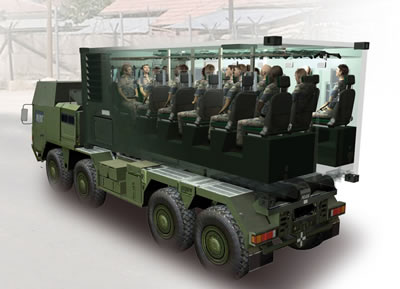