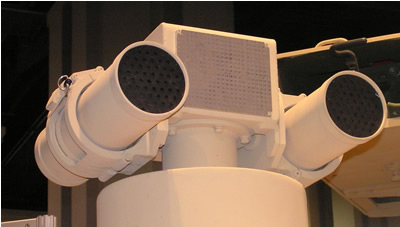 A derivative of IAAPS developmental countermeasures system, was optimized for close-in defense, was developed by United Defense in 2004, as a near-term countermeasure against RPG threats encountered in Iraq. The  Close-In Counter-Measures (CICM) System uses passive cueing sensors (flash detector) and low-cost tracking radar to detect and acquire potential threats at close ranges. Once an incoming threat is identified, the system points to its direction, and launches a barrage of 55 pellets, forming a “wall” of steel in the direction of the threat, 10 meters from the protected vehicle. Since the pellets are designed to loose energy rapidly, collateral damage to nearby troops, or bystanders is minimized, and self-inflicted damage to the protected platform is avoided. The system traverses over 180 degrees, and is loaded with two bi-directional units for full hemispherical coverage., allowing for two shots in each 180 sector.  The system can be manually reloaded immediately after the attack. The weight of the operational system is expected to be at the range of 200 kg, and due to its low recoil, it could be used on light vehicles including medium trucks and even Humvees. (although it will not leave much room for other mission payloads). A derivative of the system, considered for use on helicopters,  will use a 360 degrees traversing platform and a uni-directional charge.  CICM was successfully tested in the past year (Q4/2003 – Q3/2004), against RPG type threats, where it automatically detected launched RPGs, tracked incoming rockets, launched its countermeasures and defeated RPGs before they reached the protected system.

The Army is also testing the Close-In Active Protection System (CIAPS) which could actually be a predecessor of CICM. The system consists of a radar staring in all directions that can detect an incoming threat at very short range and launch one of an array of pre-positioned interceptors to intercept and destroy the threat shaped charge warhead before it hits the protected vehicle. It is effective against anti-tank guided missiles (ATGMs) as well as rocket-propelled grenades (RPGs) and can defeat threats launched from very short range.