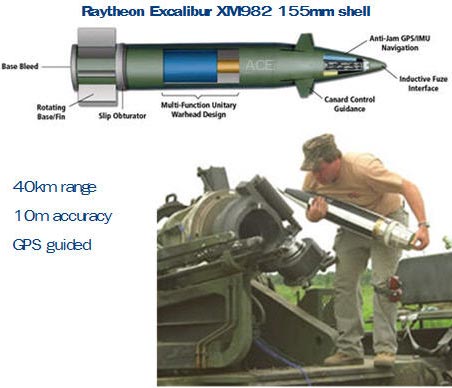 Excalibur is fired for high elevation and then glides from its apogee to the assigned target. The shell has a specially designed rotating fin for roll stabilization, and integrated base bleed which facilitates maximum range of 40km with conventional (155mm/39 Caliber) howitzers and up to 50km, when fired from future tubes. The Excalibur uses inertial and satellite based GPS guidance to execute course corrections through the flight, to achieve pinpoint targeting with an accuracy of 20m’ CEP. Four canard fins are used for guidance and control. Excalibur is actually a cargo shell, which can be loaded with unitary warhead or Submunitions such as the Bonus. Excalibur is considered to be part of the Non-Line-Of-Sight Cannon (NLOS-C) system, part of the US Army interim and objective forces’ FCS.

In June 2006 the U.S. Army awarded Raytheon Company a $42.7 million production contract for tactical and test projectiles. The contract followed a series of tests where the weapon demonstrated an accuracy of 4.5 meters (about 14.8 feet) in 12 successful guided flights. The tests successfully demonstrated the three fuzing modes (delay, height-of-burst, and point detonate) and warhead lethality. Lethality has been proven against wheeled and tracked lightly armored military systems, simulated personnel targets and a steel reinforced concrete structure. (In the initial versions Excalibur will be using a unitary warhead.) Against the concrete structure, Excalibur successfully penetrated the roof, detonating inside the structure and causing impressive damage to the simulated target array.

The US Army is considering a different version of precision artillery projectile as a future upgrade for Excalibur. For the Block 1B the Army is evaluating Saber system, developed by ATK. Saber, an advanced 155mm precision projectile will give artillery batteries a precision-fire capability with significantly more stand-off range than current 155mm artillery. It is designed for compatibility with all existing and future 155mm cannons.

The first successful test firing of the Saber was conducted in June 2006. The advanced projectile was fired to a range of 48 km from a 155mm cannon, using a Zone-5 charge, the most powerful charge configuration used by U.S. forces. The increased range of Saber’s boosted, ballistic trajectory flight path reduces the time from gun-launch to impact and supports the expanded responsibilities of Brigade Combat Teams.