Below: M-1A1 destroyed by RPG ambush. Successful attacks are scored at stationary targets, primarily from side or rear attacks, at the less protected parts of the tanks. Below – Palestinian militants equipped with RPGs. 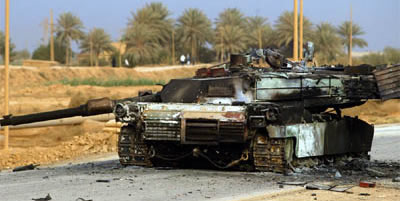 In the continuing conflict in Iraq, shoulder fired rocket propelled grenades anti-tank (RPG) were once again proven a potent weapon. RPGs performed impressively in all post WWII conflicts, especially in Vietnam, Afghanistan and Chechnya. In the 1982 war in Lebanon, Israeli soldiers were confronted on by many RPGs. Palestinian militants are also using in the occupied territories, but Israeli heavy fighting vehicles are well protected to sustain such attacks while effective tactics are used to avoid exposure of softer vehicles to such threats. Inexperienced RPG operators could engage a stationary target effectively from 150 – 300 meters, while experienced users could kill a target at up to 500 meters, and moving targets at 300 meters. Casualties and losses suffered during the Yom Kippur War, from RPGs and anti-tank missiles, caused the IDF to deploy add-on reactive armor.

The Israelis have used various types of add-on armor protection for their tanks and APCs. The most modern add-on hybrid armor package for M-113 and LAV is the L-VAS, designed under collaboration between IMI and RAFAEL. The Russian Army followed the same course as a result of its experience in Afghanistan and Chechnya. The Russians have also used cage armour, to protect against RPGs in Chechnya. In post war Iraq, RPGs have caused over fifty percent of U.S. soldiers killed in action. In Iraq, the US Army is using reactive armor to protect the Bradley M2, while the new Stryker APC is using an interim  Slat Armor until the new add-on plate armor will be delivered in 2005. Placement of sand bags and supplies boxes outside the turret and hull are also creating a gap between the RPG and the steel armor, that could degrade and even defeat the HEAT warhead of the RPG. 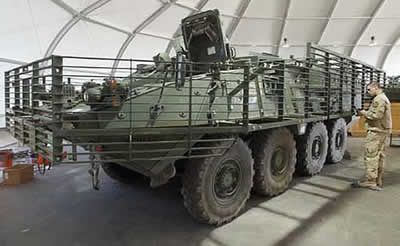 Designed specifically for close combat operations, this reliable, simple and affordable weapon poses a serious threat to even the heaviest tanks, when used by determined fighters, in urban and guerrilla warfare. In Guerilla warfare, the RPG-7 is an effective tool against convoys, isolated checkpoints, and observation posts, where it is frequently used in volleys, coordination with other shooters. RPGs are also used in certain conditions against low, slow flying or hovering helicopters, where the weapon is fired from maximum range (920 meters) utilizing the self destruct mechanism as a makeshift proximity fuze. The weapon scored few successes in hitting helicopters Afghanistan and Iraq. Recent improvements of the basic weapon include the V1 tandem warhead rocket and RPG-29, available in tandem-HEAT and thermobaric versions.