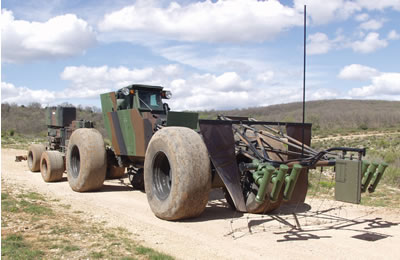 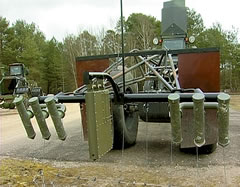 The upgraded SOVIM-2 system incorporates two vehicles and three trailers. The first vehicle designated VDM carries magnetic and thermal decoys that trigger heat sensitive, trip wire and tilt-rod activated mines. The vehicle travels at a speed of 25 km/h and uses low pressure tires which makes it practically immune to pressure sensitive mines. These are detonated by the heavyweight trailer, towed behind the VDM. A follow-on vehicle is the VTR, which tows two additional trailers to tackle residual un-detonated mines to create a safe track up to a width of 3.9 meters. According to MBDA, a single SOUVIM –2 team can clear 150 km of roads in one day. These vehicles are particularly efficient in securing roads on peacekeeping operations and prior to the insertion of humanitarian aid activities in combat zones. SOUVIM-2 is undergoing field trials with the French Army in 2004. Upgrading of the remaining systems currently in service (4) is expected by 2006-2007. 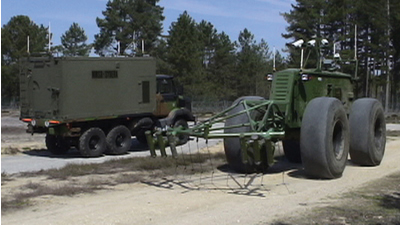 Follow-on replacement of the VTR could be the SYDERA, developed under a joint Franco-German demonstration program launched in 2003. SYDERA comprises a Smart Decoy Vehicle (SDV) remotely controlled from a command vehicle (CCV) both traveling at a speed of 20km/h. Detection and verification vehicles are clearing the remaining mines. The system could be implemented on rout, area and airfield clearing missions. MBDA is the prime contractor for the program, while Rheinmetall Land Systems work on the vehicles and detection systems, and Thales Airborne Systems supplies the remote control aspects of the system. The prototype is scheduled for completion by 2005 and will undergo operational evaluations in 2006. If proven successful, the system could enter service around 2010.