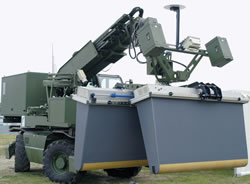 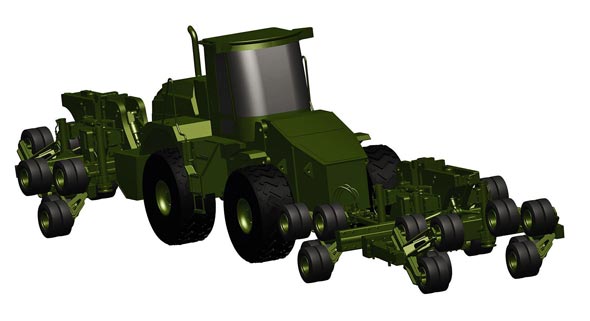 Developed under cooperation between Rheinmetall Defense, MBDA and Thales, the Franco-German MMSR-SYDERA consortium is developing a system consisting of various vehicles for detecting and detonating landmines and IEDs.

MMSR SYDERA program will demonstrate how a single system can create a mine-free path as well as clearing a large area, such as an airfield, from hazardous mines. The demonstrator has been completed and is ready to begin trials in Germany, with operational evaluation planned for 2007. Full scale development is expected to start in 2009.

The system will include five vehicles. The command and control vehicle (CCV), developed by Thales, will be traveling behind the group, remotely controlling the system’s decoys, and counter-mine vehicles traveling in front. These will include MBDA developed Smart Decoy Vehicle (SDV) and Heavy Decoy Vehicle (HDV), based on the SOUVIM-2 currently operational with the French Army. SDV travels at 20 kph, detonating all types of non-pressure sensitive mines. The HDV will be an articulated vehicle, specially designed to clear pressure-sensitive mines covering routes up to 4.5 meters wide. The system will also comprise two unmanned systems developed in Germany by Rheinmetall Land Systems – the Detection Vehicle (DEV), Verification Vehicle (VEV) clearing the