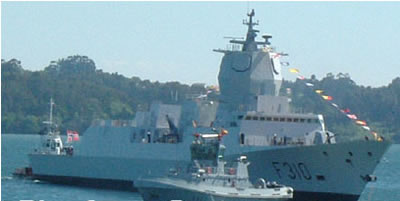 Fridtjof Nansen is the first of five vessels of this to be fielded by the Norwegian Navy. It was formally commissioned at Navantia’s shipyard in Ferrol, Spain, in April 2006. In June, Lockheed Martin completed factory production of the fifth, and final, SPY-1F Aegis Weapon System to be installed on F-314, Thor Heyerdahl.

The SPY-1F radar is designed to provide high performance surveillance, detection and tracking, and operate with the Evolved Sea Sparrow Missile (ESSM) and Standard Missile 2. Lockheed Martin is responsible for system integration of the multi-mission Integrated Warfare System, including sensors, command and control, communications and weapons, for the Fridtjof Nansen-class frigates.

The Aegis Weapon System includes the SPY-1 radar paired with the MK-41 Vertical Launching System, capable of delivering rapid reaction time and simultaneous firepower for every mission and threat environment in naval warfare. The Aegis Weapon System is currently deployed on 80 ships around the globe, with more than 25 additional ships planned. In addition to the U.S. Navy Aegis has been deployed with Australia, Japan, South Korea and Spain.