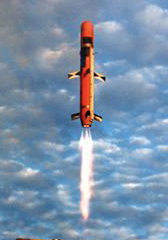 The Precision Attack Missile (PAM) is a low-cost direct attack missile designed as part of the Netfires NLOS-LS system. It measures seven inch diameter, to fit the same launchers used by LAM. The five foot long missile weighs about 117 pounds. Using a variable thrust solid rocket motor, optimized for the launch, acceleration and cruise phases, PAM will be designed to support operations at a range up to 40 km. It will be equipped with a dual-mode Uncooled Imaging Infrared/Semi-Active Laser (UCIIR/SAL) seeker, and a multi-mode warhead. A two-way data links will link the LAM and PAM with the command center and to each other, to verify targeting before attack, assess battle damage, support “lock-on after launch” PAM has a multi-node network radio that will provide in-flight retargeting and battle damage imagery to the war fighter.

The seeker and warhead elements of the PAM are considered for implementation in other aerial and ground launched weapons, specifically PAAMS, a follow-on to the cancelled JCM, proposed by Raytheon.

The NLOS CLU has 15 canistered missiles, the CLU has an autonomous vertical launcher weighing 3,150 lbs. Each CLU is self contained with autonomous location unit, data radio and launch control systems.