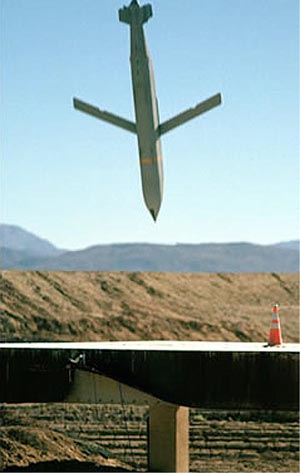 The JSOW family of precision strike weapons is a joint US Navy and US Air Force program, based on a modular design that uses a common airframe, guidance systems and flight control. The missile has a maximum range of 70 km which allows delivery well outside of the lethal range of most enemy air defenses. JSOW uses an autonomous, integrated Global Positioning System and Inertial Measurement System (GPS/IMS) navigation system. JSOW receives the targeting information in a pre-briefed mode or via targeting updates received while airborne, through onboard sensors or other third party targeting assets. After it arrives in the target area, the AGM-154C activates the IIR seeker for autonomous guidance in the terminal phase of the flight to attack with precision accuracy.

JSOW is designed to destroy soft and hardened targets, including armored vehicles and fixed structures. The weapon has a low signature design, which contributes to high probability of survival enroute to defended targets. Two JSOW variants are currently available – AGM-154A (JSOW-A) integrates the BLU-97, Combined Effects Munitions Bomblets and the BLU-108, Sensor Fused Weapon submunitions used against area targets, armor and land combatants. JSOW-C is equipped with an imaging infrared (IIR) seeker and Automatic Target Acquisition (ATA) algorithms, providing a true launch-and-leave weapon with a demonstrated standoff range of 63 nautical miles precision strike capability. JSOW C uses the unitary blast/fragmentation Broach penetrating multi-stage warhead (also used in the Storm Shadow/ SCALP EG cruise missile) built by BAE Systems and a fuze built by Thales. JSOW-C has a unique capability for a glide weapon in its ability to attack a hardened target in a near-horizontal mode. During operational testing recently completed by the US Navy, the missile demonstrated an accuracy of four feet circular error probability (CEP), well within the 3 meter requirement. In this series of tests, JSOW C scored nine direct hits out of ten missiles launches. By December 2004 the weapon completed operational testing and is scheduled to become operational by early 2005. It is expected to become operational with the US Navy F/A-18s and on the new F-16 Block 52‘s of the air force of Poland.

JSOW Block II, currently under development for the US Navy, has started flight testing with  initial deliveries scheduled by 2007. The improved weapon will offer lower cost and be more adaptable for future modifications. Block II has significantly reduced unit cost through airframe redesign to a major single piece, employment of less expensive components, advanced technology and a reduction in parts count. JSOW’s shelf life has been doubled, eliminating major lifecycle costs. Block II reduces the unit cost of JSOW by more than 25 percent.

Block II will maintain all of the standoff and survivability of the current JSOW and include an improved anti-jam Global Positioning System receiver. A new payload option for the JSOW A is also part of the Block II program. This new version uses a 500-pound BLU-111 (MK-82) warhead and is designated the AGM-154A-1. The BLU-111 variant is the lowest cost JSOW variant and eliminates unexploded ordnance concerns of cluster munitions while maintaining or increasing effectiveness against a broad target set. It is primarily intended for the international market. It is designed as insensitive munition for additional safety. Further JSOW improvements include an anti-ship version, addition of moving-target attack capability, and the introduction of a datalink for bomb-hit indication and net-centric integration.

JSOW is currently mounted on the F/A-18, F-16 B-52 and B-2 aircraft and will soon be flying on the B-1B, and F-15E. JSOW is also a threshold weapon for the F-35 (JSF) initial operational capability. More than 400 JSOW-A weapons have been used in combat operations to date, 100 of which were fired during OIF. The missile is currently in production, for Navy F/A-18s and has been selected by Poland for use on its F-16s. JSOW A and C versions are currently in production under $200 million in contracts awarded to Raytheon by the US DOD. The contracts covers 546 JSOW-As (231 for the Navy and 315 for the Air Force) and 328 JSOW-Cs (all Navy) plus additional missiles for testing purposes. Deliveries are expected to complete by February 2006.