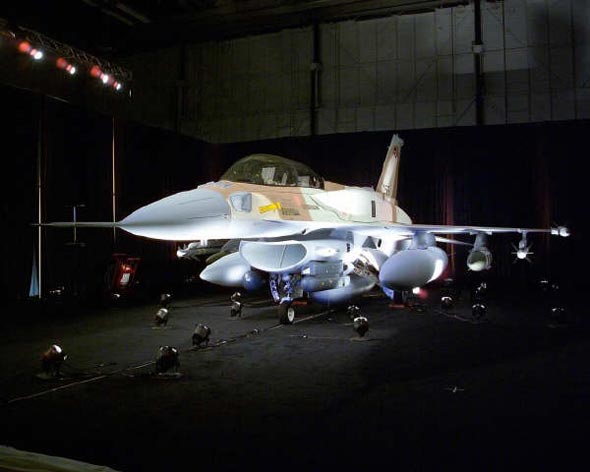 With the introduction of inertially aided weapons, such as the GBU-31 Joint Direct Attack Munition (JDAM), and the AGP-68(V)9 SAR imagery, the F-16 gains an enhanced capability for all-weather precision strike from standoff distance. The aircraft can also deliver the AGM-154 Joint Standoff Weapon (JSOW), and CBU-103/104/105 Wind Corrected Munitions Dispensers. So far, the use of such advanced precion attack weapons capability was available in the IAF only with the Boeing F-15I (Raam).

By 2005, the IAF is expecting to complete acceptance testing and fielding of the RAFAEL SPICE guided weapon kit for Mk84 bombs. Later, the Israel Air Force is expecting to get the RAFAEL Have-Lite standoff attack missile, which will further enhance the range, and survivability of these aircraft. Current versions of F-16Is are equipped with the Python 4 close range (dogfight) all aspect missile, and AIM-120A (AMRAAM) Beyond Visual Range (BVR) missiles. Pyhon 5 a fifth generation of the air/air missiles, currently undergoing advanced flight testing, are developed by RAFAEL as full sphere air/air missiles, which will offer extended range capability both at long range and short range engagement. The missile has a unique lock-on after launch capability, which enables its employment over long ranges, as well as at chasing the launching aircraft. SPICE is an advanced, autonomous navigation system that can be added on to conventional Mk-83/84 weapons, transforming them into autonomous, precision weapons. SPICE uses a combination of inertial and scene matching navigation to home-in on point targets that have distinctive shapes. Since the system uses a combination of navigation methods, is immune to GPS errors and jamming.

A future addition will be the employment of the RAFAEL/Lockheed Martin Have Lite missile. A derivative of the Have Nap, which is already in use with the USAF, and the air forces of Israel, Australia and Turkey, Have Lite enable improved day/night capability, operation by a single pilot, and is adaptable to smaller platforms such as the F-16. The missile offers high precision attack capability of time sensitive targets, as it enables “man-in-the-loop” control, at the terminal phase of the mission, by the use of imaging homing sensor and a two-way datalink to the transmit a real-time image of the target to the controller. The controller can decide what parts of the target should be attacked, and instruct the missile to aim to these points.