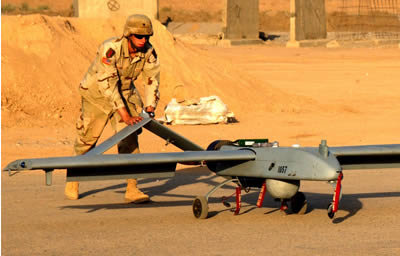 Shaddow-200 RQ-7B Tactical UAV is used to support the brigade with integral intelligence, reconnaissance and target acquisition at distances of up to 125 km. The UAV uses the IAI/Tamam POP-200 payload, which detects and identifies targets from a range of 3-5 kilometers. It also offers automatic target tracking. With Imagery received at the Shadow’s One System ground system is shared via datalinks with other intelligence assets, including ASAS, the Air Forces’ Joint STARS, Intelligence and field artillery information systems.

The all composite constructed Shadow 200 uses a hydraulic launcher for takeoff. The Shadow can be launched over a distance of 10 meters, and in crosswinds as strong as 20kt. Landing is performed automatically in day or night using a portable tracking system, an airborne transponder and arresting cable system. The entire Shadow unit is air transportable with three C-130 aircraft.

The US Army plans to buy a total of 70 TUAV systems. According to planning, every brigade sent to Iraq or Afghanistan will be equipped with the Shadow. The units currently operating the TUAV in Iraq include the 4th Infantry, 1st Cavalry and 82nd Airborne and 2nd Infantry divisions and the Stryker brigades. Some units also operate the Hunter and I-Gnat UAV systems. 51 systems have already been delivered by October 2006, when the Shadow 200 fleet accumulated 129,000 flight hours, more than 85% in support of combat operations in Southwest Asia. Production is scheduled to commence through September 2008.

In Iraq the Shadow 200 is flown by nine Brigade’s military intelligence (MI) platoons, in reconnaissance missions and in support of force protection missions, to oversee vehicle convoys. Shadow companies are deployed with maneuver brigades, including the new Stryker brigades. Although the basic system has been operating well, some improvements are already planned, including enhanced wing, which will carry more fuel, and increase endurance by 20%. The system will also get the tactical common datalink (TCDL), which will eliminate interference encountered in dense electromagnetic environments. Other improvements will improve the system’s POP200 payload, refining the target location error, and adding laser designator. The Army also considers fielding a new “Step & Stare” payload (probably L-3 11SST type) to augment the POP-200 with the capability of rapid mapping of large area. In October 2006 the US Army awarded AAI US$ 13.5 million contract for the first lot of POP-300 payloads, to replace currently used POP-200. A follow-on order expected in early 2007 will bring the total value of this procurement is expected to be $27 million. 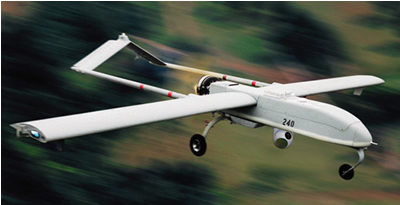 Since December 1999, when the U. S. Army selected AAI to be the Shadow TUAV system prime contractor, the company has received awards for the production of 64Shadow systems, bringing to 256 the total number of air vehicles ordered. As of May 2006, 43 systems have thus far been delivered, with system deliveries now extending through November 2006. On May 4th 2006 the US Army contracted AAI $87 million to deliver nine additional Shadow 200 systems under full rate production. The order covers 36RQ-7B UAVs,  18 ground control systems, This program will continue through December 2009. The company also received $65 million for technical support and logistics to be provided through October 2007.