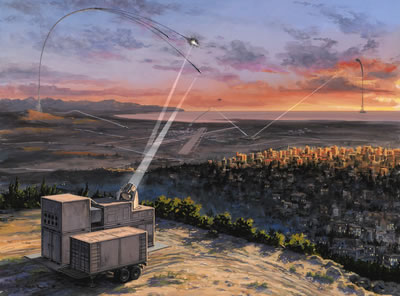 Northrop Grumman is proposing a derivative of its high power chemical laser system to be used as a ground based interceptor of man-portable anti-aircraft missiles which could be used by terrorists trying to hit passenger aircraft. The new system, called Skyguard will use the high-energy chemical laser known as THEL, designed to protect against rocket, artillery and mortar (RAM) threats. Benefiting from significant technological advancements, Skyguard has higher power than heritage systems and a larger beam, making it a much more capable system, the company said.

In fact, Northrop Grumman foresee a much wider role for Skyguard – with the system evolving into “laser-based air defense system for U.S. government agencies and allies that require near-term defense against short-range ballistic missiles, short- and long-range rockets, artillery shells, mortars, unmanned aerial vehicles and cruise missiles.” The company expects a single Skyguard system will be able to defend deployed forces, a large military installation, and/or a large civilian population or industrial area. One Skyguard system is capable of generating a protective shield of about 10 kilometers in diameter.

Northrop Grumman is hoping to market the civilian system to the US homeland security sector and a military version of THEL to protect forward military installations from enemy and insurgents rockets, artillery and mortars attacks. The company already offered the system to protect Israeli towns faced with repeated attacks from Gaza and Lebanon, as well as for US forces in Iraq.

According to a report published in Aerospace Daily, Skyguard could protect aircraft from man-portable air defense system (MANPADS) shoulder-fired rockets out to a range of roughly 20 kilometers (12.4 miles), while against harder RAM targets, the effective range is 5 kilometers (3.1 miles). Weather can degrade the system but not nullify it.
According to Aerospace Daily, the cost could drop to $25 – $30 million apiece, if the system is ordered at sufficient quantities. each shot costs about $1,000 which represents the cost of consumable chemicals.

One concern raised about chemical lasers was the toxic gases released during operations. According to Northrop Grumman, the system’s exhaust is not toxic, but mostly helium and steam. Therefore, the system requires a “keep out zone” of 30 meters, smaller than conventional rocket systems such as Stinger and Patriot. If users want to make the system totally safe, a scrubber can be added. 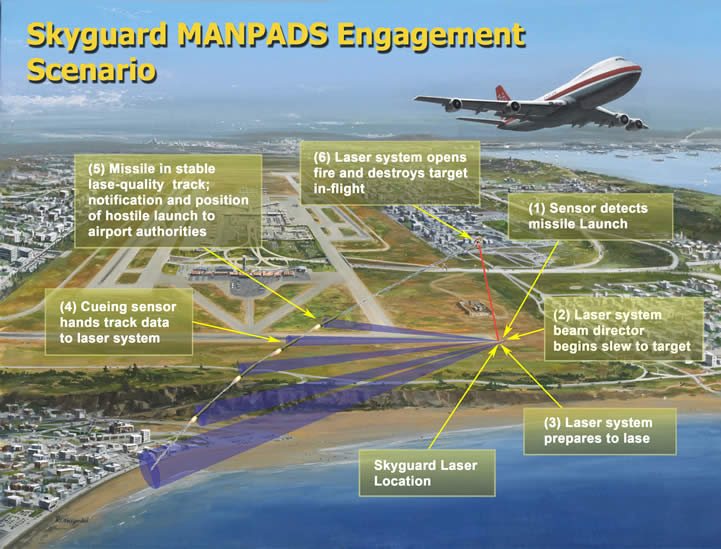 On October 20, 2006 Northrop Grumman announced that the US Department of Homeland Security is funding an evaluation of Northrop Grumman’s land-based, counter-MANPADS laser system (Skyguard) with US$1.9 million. The 18 month program will evaluate the capabilities of the system to defeat typical missile threats to passenger. As part of the program, Northrop Grumman will develop a detailed operational concept for using ground-based high-energy laser systems in the civil aviation environment, perform component-level testing and assess life-cycle costs. A formal technology readiness level (TRL) assessment will be made of ground-based, non-DIRCM (directional infrared countermeasures) technologies in terms of their potential application in the civil aviation environment, the department noted, specifying that technology readiness levels of TRL6 or TRL7 are expected in the systems it chooses for further evaluation. Federal officials said the solutions they are seeking are based on existing component technologies, emphasizing that the program will not undertake the development of new elements.

A recent article published by the Israeli online magazine Omedia provides an insight into some of the controversy the SkyGuard system faces in Israel, primarily within the MOD’s Defense Research & Development Directorate and local industries. Israel’s DDRD traditionally favored investment in offensive, deterrent systems and rejected most defensive systems with the exception of the Arrow system (which also met strong opposition in Israel, primarily with the Israel Air Force). In the article, Dr. Oded Amichai, former senior Rafael representative, counters arguments raised against the system, describe its advantages and reveals who is to blame for it not being in operation in Israel today.