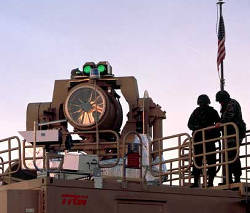 The fixed-site version Advanced Concept Technology Demonstration (ACTD) Tactical High Energy Laser (THEL) THEL, was developed by TRW Inc. under a $89 million contract. During several tests in the USA, the system has shot down 25 Katyusha rockets, but has not been deployed.

The system also known as Nautilus, has not progressed much since the end of the demonstration program, since the lack of mobility and the fixed base limitations of the system made in insufficient to counter long range rockets currently employed by Hezbulla at the Israeli northern border with Lebanon. While Katyusha rockets had a range of 20 kilometers, and could hit only a few urban targets, the long range rockets have a range of 70 kilometers and can hit strategic facilities and large urban areas in the Haifa bay. A laser-based defense against such weapons must rely on more systems, which could be rapidly mobilized to protect a much larger area. Such design is currently being implemented under the MTHEL program. Similar threats could face US contingencies in other parts of the world. This requirement is driving the need for an air-mobile version of the beam weapon.

A study completed in 2001 concluded that the rocket interceptor has “lots of promise” and further development should be pursued, primarily in enabling system’s mobility. Mobility considerations for the future mobile systems include system mobility (road and off road capabilities) and air transportability, including the type of transport aircraft it should fit on (C-130, C-17 or C-5). Conclusions of these studies will define the necessary size- reduction technologies required for the future version.Further studies of the system include the use of such laser beam weapons to provide “hard kill” defenses against artillery projectiles, UAVs and cruise missiles.

During a recent test conducted on Aug. 24, 2004 the system shot down multiple mortar rounds, demonstrating potential its battlefield application for to protection against common threats. The test represented actual mortar threat scenarios. Targets were intercepted by the THEL testbed and destroyed; both single mortar rounds and salvo were tested.

In a typical engagement scenario, a rocket is launched toward the defended area. Upon detection by the THEL fire control radar (image on right), the radar establishes trajectory information about the incoming rocket, then “hands off” the target to the pointer-tracker subsystem, which includes the beam director (top of page above). The PTS tracks the target optically, then begins a “fine tracking” process for THEL’s beam director, which then places THEL’s high-energy laser on target. The energy of the laser causes intense heating of the target, which causes its warhead to explode. The debris from the target falls quickly to the ground, far short of the defended area.

The purpose of the MTHEL program is to develop and test the first mobile Directed Energy weapon system capable of detecting, tracking, engaging, and defeating Rockets/Artillery/Mortars (RAM), cruise missiles, short-range ballistic missiles, and unmanned aerial vehicles. Despite the progress made with MTHEL, the US Army stopped funding for the program claiming it was too bulky.

Northrop Grumman proposed to use “relocatable” THEL systems to counter mortar and rocket threats on US military facilities in Iraq. Since funding for the MTHEL program was cut in 2004, such system may not be available for deployment in the near future. A second generation “relocatable” THEL system is currently considered for deployment. Such system will weigh about one-quarter the size of the current THEL and will fit into a 20 foot container which can be airlifted to forward areas. The new system will offer the same capability. Such systems are expected to cost $25 million a piece, when fielded in large numbers (30+). Future laser weapons will be based on electrically generated lasers and run on diesel fuel, rather than specially supplied chemical liquid fuel. However, while THEL based weapon could be fielded in less than two years, an equivalent system based on electrically powered laser will not be feasible before 2011. The system’s radar is already operational in Israel, providing early warning from Palestinian attacks on the the city of Shderot. there are also rumors about a planned THEL deployment to Iraq, where it could provide RAM protection of the US Forces command and new Iraqi government.